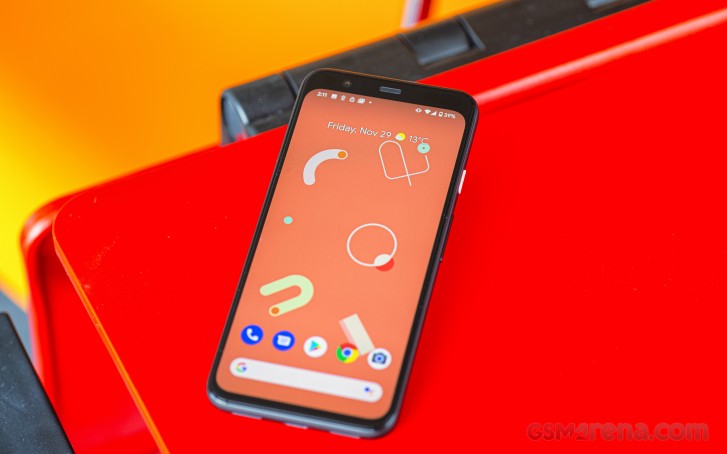 Both Pixel 4 phones use P-OLED panels, the 'P' standing for plastic. That is, the substrate below the display is plastic as opposed to glass. In that sense, a P-OLED is no different from a Samsung AMOLED which also has a plastic underlying layer (both are also active-matrix, the 'AM' in AMOLED).

That minor detour dealt with, we measured a maximum brightness of 423nits on the Pixel 4, a dozen nits lower than the XL and marginally lower than the Pixel 3 as well. As with other Pixels, the 4 lacks an auto ('Adaptive') brightness boost that you'd find on most other brands of phones, whether they use OLED panels or not. As a result, the Pixel 4 can't get as bright as a Galaxy S10, LG G8X, Xperia 5, or a OnePlus 7T. That last one can be 100nits brighter than the Pixel even when adjusting the slider by hand, while the iPhone 11 Pro reaches as high as 800nits in manual mode. Even so, the Pixel 4's screen poses no usability issues when viewing outdoors, though it's not as good under direct sunlight as a Galaxy S10, for example.

The Pixel 4 has a two-way approach to handling color reproduction. The baseline is set by the display mode, where you can select between Natural, Boosted, and Adaptive modes, the default being Adaptive. Then there's the Ambient EQ, which adapts the colors to the ambient light - think Apple's True Tone.

With Ambient EQ disabled, we explored the different color modes, comparing the output against the usual target color spaces. Expectedly, 'Natural' mode got us very close to the true reproduction of sRGB content - we measured an average DeltaE of 2.3 and a maximum of 3.9 - a pretty good showing, marred slightly by the fact that the 3.9 is for point white. The Boosted mode is there for your DCI-P3 content, and it's accurate to within an average DeltaE of 2.4 (4.5 maximum goes to Cyan), while in Adaptive we measured a 2.6 average for DCI-P3.

One of our main concerns about the Pixel 4's overall performance as a smartphone stemmed from its battery capacity - the 2,800mAh number is tiiiny, while similarly sized Galaxy S10e and Xperia 5 have cells in the 3,100mAh ballpark.

Our testing proved that our concerns were well-founded. The Pixel 4 couldn't make it to the 10-hour mark in web browsing and lasted us a little over 11 hours of looping videos. The S10e can do an hour and a half longer on the web and 4 hours more, while the Xperia adds even more minutes on top. The iPhone 11, on the other hand, clocked a whopping 15:29 of running our web script and 18:43h of video playback. In all fairness, we did run the Pixel 4 in its 90Hz mode, though it does have its own concepts of when to kick in and when not to.

Anyway, the Pixel 4 was also good for almost 21 hours of 3G voice calls - as much as the s10e, 3 hours more than the iPhone, and about 8 hours short of the Xperia's time. Adding the standby draw into the mix, we calculated an overall Endurance rating of 62 hours for the Google Pixel 4 - far from impressive. 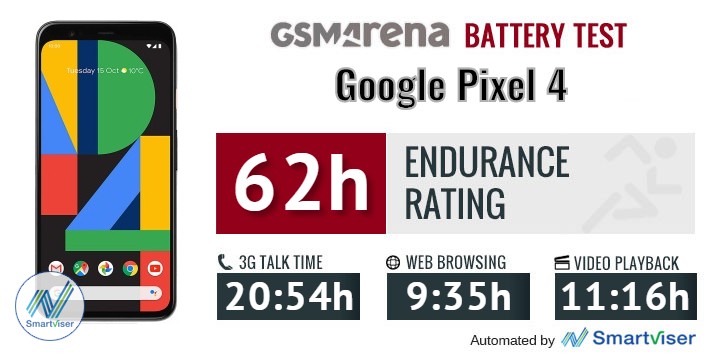 Our battery tests were automated thanks to SmartViser, using its viSer App. The endurance rating above denotes how long a single battery charge will last you if you use the Google Pixel 4 for an hour each of telephony, web browsing, and video playback daily. We've established this usage pattern so that our battery results are comparable across devices in the most common day-to-day tasks. The battery testing procedure is described in detail in case you're interested in the nitty-gritty. You can check out our complete battery test table, where you can see how all of the smartphones we've tested will compare under your own typical use.

Topping up the Pixel 4's battery with the included 18W USB Power Delivery adapter took us 1:27h with 49% showing in the battery indicator at the half-hour mark. It's not the best of results, particularly when accounting for the small capacity and the comparatively low endurance that you'd get out of the 49% that a half-hour charging session will get you.

The Google Pixel 4 has a stereo speaker configuration, in which there is a main loudspeaker on the bottom and the earpiece doubles as the second channel. As far as such setups go, the Pixel 4's is among the least disbalanced when it comes to the two speakers tonal range and loudness - while the earpiece isn't quite as loud as the speaker on the bottom, it does punch harder than competitors' earpieces. 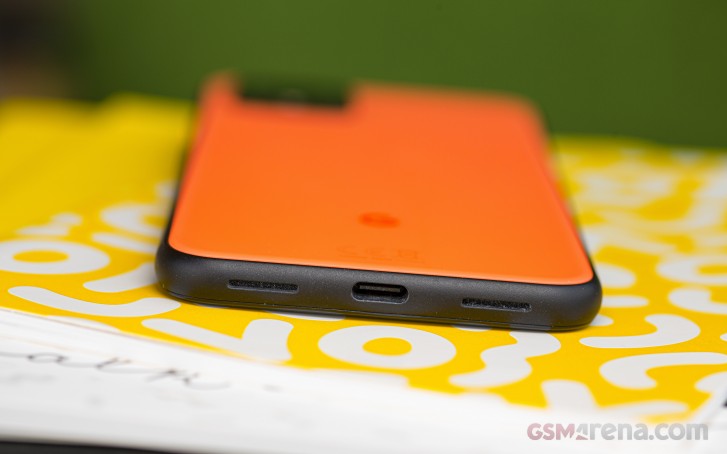 In our testing, the 4 couldn't quite match the 4XL's numbers for loudness, but was more than loud enough, easily placing in the Excellent bowl after our three sample tracks. It beat the iPhone 11 and 11 Pro and S10e (but not the S10), though it couldn't threaten the OnePlus 7T for loudness. The 7T does also sound a bit better, but the Pixel 4 still does output full and balanced tunes.

We now move on to testing the Google Pixel 4 audio performance via its audio jack. With it lacking a dedicated 3.5mm jack, we had to resort to a USB-C-to-3.5mm adapter for the test. Since Google doesn't even supply one in the retail package, we used the official adapter than the company is selling. So fair warning - your mileage might vary if you use a different adapter.

When hooked to an active external amplifier the Pixel 4 came somewhat short of our expectations for a 2019 smartphone, let alone a flagship. Its signal-to-noise ratio was disappointing, and so were its stereo separation and general volume level.

Headphones caused a small spike in intermodulation distortion and a further increase in stereo crosstalk - no big deal on its own, but when you are starting as low as the Pixel 4, this means a mediocre overall score. Oh, and loudness dropped further, so don't even think of hooking your high impedance headphones to this one. 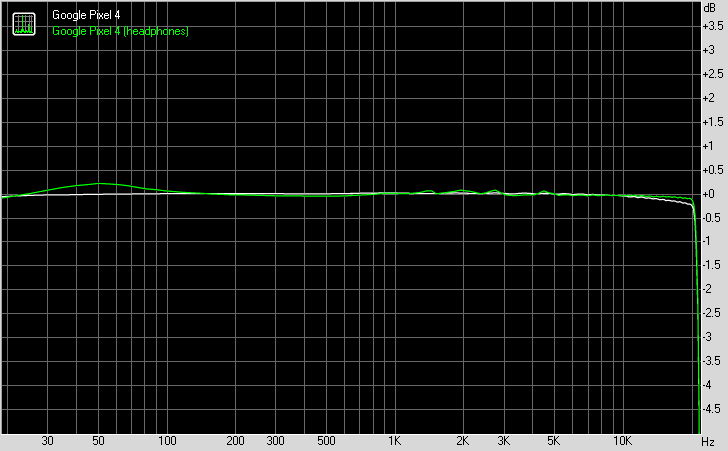