Google reveals Pixel 4 will have face unlock and motion gestures

Google has once again decided to get in front of all of the Pixel 4 leaks and announce some of the upcoming features in a blog post.

One of these new features is Motion Sense. Based on Soli, the project Google started over four years ago, Motion Sense will let you control basic functions on your Pixel 4 such as skipping songs, snoozing alarms and silencing phone calls just by waving your hands.

Motion Sense works with the help of a complex radar system placed above the display that can sense even the smallest of movement. As of now the system is only limited to recognizing simple hand-waving gestures but it can be configured to do more complex things in future. Google does say, however, that Motion Sense will only be available in select countries where Pixel is available.

The other major feature announced today for the Pixel 4 is Face unlock. This is not like the facial recognition that we have on third-party Android manufacturer devices today, or what Android itself used to have built-in at one point. This system is closer to the system Apple introduced with the iPhone X in terms of complexity and more importantly, security. 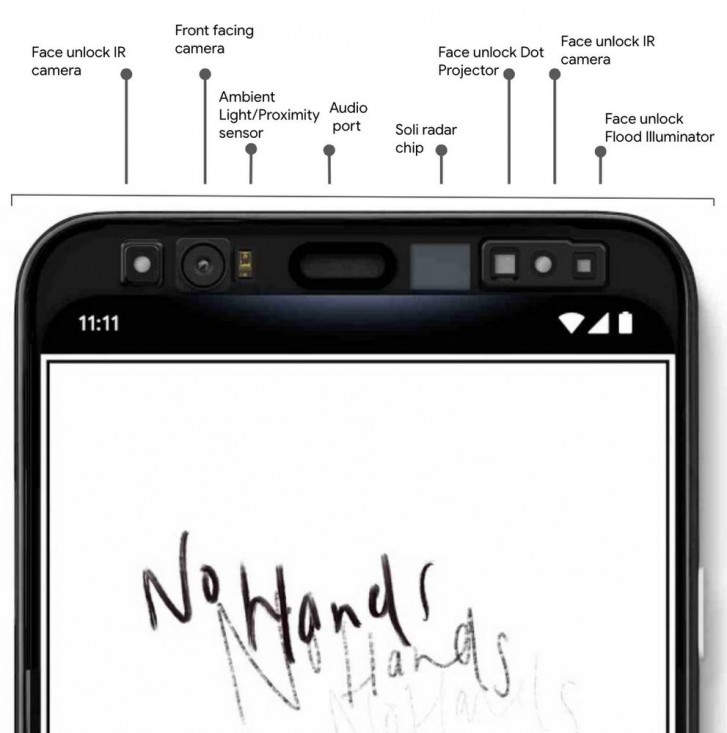 While current Android facial recognition systems just take a picture of your face, Face unlock on Pixel 4 will scan a 3D map of your face using a dot projector, IR camera and flood illuminator and then will use that information to unlock. This is significantly more secure than just a picture as it's far less likely to be spoofed.

The system is pretty much identical to the way it functions on iOS in terms of hardware and Google also says it will save the facial data securely in its Titan M chip so nobody will have access to it. Where it differs from Face ID is in the implementation.

While iOS requires you to swipe up after Face ID completes scanning your face, Face unlock on the Pixel 4 will sense your hand moving towards the phone with the Soli radar chip and then power on the Face unlock hardware and if it detects your face it will unlock the phone as you are picking it up so you go straight to your homescreen or wherever you left your phone. Google's system also works in any orientation, including upside down.

We are not yet sure if Google will still include a fingerprint sensor on the device alongside Face unlock or go the Apple route and forgo it entirely. There isn't one on the back of the phone but there could still be one underneath the display. However, if we had to bet we would say Google might just go all-in on the Face unlock feature.

Google says the Pixel 4 will be coming later this year. We don't have a concrete launch date yet but perhaps the time in the image above is a clue.

Clearly you care. Lol. Otherwise you wouldn't try to defend the useless pixel. The world's most expensive beta phone, that the users has to pay fully for, so they can help fixing the next generation. It doesn't matter how it works, it has been seen b...

Oh, you mean Samsung worst S series phone? Pretty sure the so called Motion Sense using radar is different from the S4's garbage "Air Gestures" which relies on an infrared sensor. The Galaxy S4 is probably one of the worst S series phones in terms of...

Wonder when they'll incorporate a 360 camera? Niche, yes, but something slightly fresher.