Google to hold an event in India on September 15

Google announced it is holding an event on September 15 in India after sending out press invites. The event is happening on Monday at 12AM with Google saying that more details will be revealed as the date draws near. 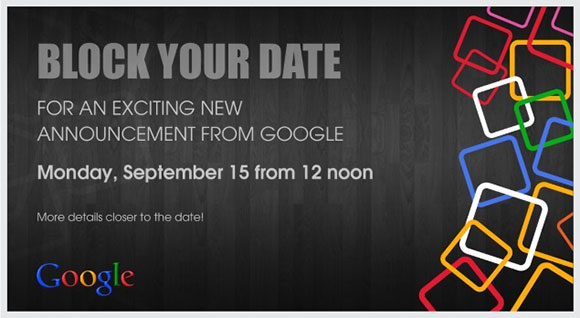 The company is likely going to reveal its detailed plans for the Android One program. Announced at Google I/O this year, the program includes phone makers Karbonn, Micromax and Spice as the first to take part.

When revealing Android One, Sundar Pichai said that Google wants to take the wheel on the user experience in the entry-level segment. As a result, the phones under the Android One initiative will come with almost stock Android software.

However, the title "Block the date" is intriguing as we think it suggests the event will also touch upon the Google Ara project. Ara was initially developed by Motorola, but following the Lenovo deal to acquire the company, Google said it will keep Project Ara for itself.

The Ara smartphones will have removable modules that will let you replace or upgrade specific parts of the device. The event is going to be interesting for sure, so don't forget the mark down the date.

Looks like it is an Andorid wear party... look at the squares on the right side of the invite.