Google's upcoming Nexus 10 slate has leaked out in live photos, confirming previous rumors for the Samsung made tablet. Set to be officially unveiled on Monday, the device packs impressive specifications, headed by a stunning 10.1" display with a iPad beating resolution of 2560x1600 pixels and a pixel density of 298.9ppi. 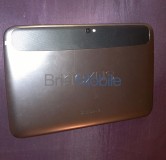 The Google Nexus 10 will feature a brand new dual-core Samsung Exynos 5250 chipset, whose Cortex-A15 cores run at 1.7GHz. The new silicon is reportedly faring better in benchmark scores than the quad-core Qualcomm Snapdragon S4 Pro and Apple's custom A6, but we got no actual scores confirming that.

The Mali -T604 GPU is also brand new - it should be able to handle the massive amount of pixels with ease. Two gigs of RAM, 16GB of non-expandable built-in memory (other options will likely be available), 5MP camera (you can check out its samples here) with front-facing companion, and full connectivity suite are also on board.

The back of the slate appears to be made of metal, while the dual-speakers at its front remind us of its Samsung roots. The tablet is said to be remarkably thin for its size.

The Google Nexus 10 will launch with Android 4.2, which will still go by the name Jelly Bean, but will bring a number of improvements to the OS. The more notable ones include improved camera UI, and connectivity toggles in the notification area.

The Google Nexus 10 will break cover at a Google event in New York City on Monday, October 29. We will be there live, so be sure to stick around for the full scoop on everything Android.

LOL!!! you've got a point there. I wouldn't touch a contract phone now. 24 months contract and the phone is obsolete long before the contract has ended. I pay cash for a sim free phone like you do. I didn't get to see the comment before it was delete...

Makes me wonder if s4 is on its way or maybe a phone with exynos 5250 will be released and maybe I should wait to buy that instead of the lg nexus (which its storage sucks unless they offer 32gb).