GSMArena's top 10 most popular news and reviews in 2012

2012 was a busy year for the smartphone industry, which worked pretty hard to produce some pretty good products we’ve ever seen. As expert reviewers we also had our hands full, trying to cover as many of the phones as we could get our hands on to make picking your next smartphone as easy as possible. 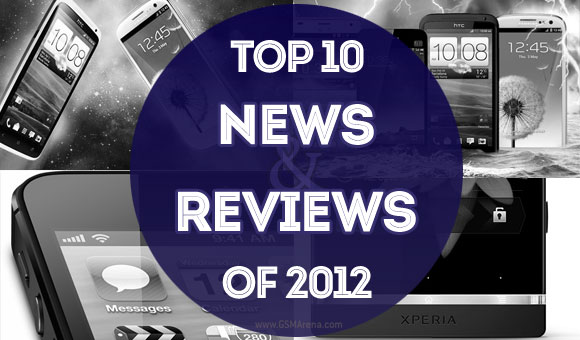 Naturally, you enjoyed some articles more than others, giving us a hint what type of articles we should focus more on doing in 2013. Now, let’s dig right in and take a walk down memory lane and see the top 10 most read news and reviews of last year.

Two of the rockstars of the Android scene were undoubtedly the Samsung Galaxy S III and the HTC One X. We did review them separately, but the article to generate the most interest was their direct battle.

The Samsung Galaxy S III was selling like hot cake last year and so did our review of the Korean flagship. With more than 3,6 million views, we sure got most of your questions answered and helped you get more familiar with the smartphone.

Not surprisingly, our Apple iPhone 5 vs. Samsung Galaxy S III was the third most read article for last year. It would probably have been on top if the new Apple flagship had come out earlier. In fact, the Galaxy S III is so popular that it's involved in 5 of the 10 most popular review articles this year.

Here’s the full list of the most read articles on GSMArena for 2012.

It was a busy year for both Apple and Samsung and naturally, they occupied our top 10 news list.

The most important piece of news for 2012, according to your, our readers, was the official announcement of the iPhone 5. Rather unexpectedly, amidst all the flagship smartphone craze, the launch of the Galaxy S Duos and Galaxy Y Duos Lite sneaks up as second most read piece of news for last year.

The third place is taken by the Samsung's announcement of the Galaxy S III flagship, which isn't surprising considering its success in our review and versus-kind of articles.

Notable additions to the list are the announcements of the Nokia's 41 MP camera-rocking PureView 808 and the first ever smartphone with a full HD, the HTC J Butterfly, taking 6th and 9th place, respectively.

Interested about the rest of the rankings? Check out the table below.


We are hoping 2013 will be even more action packed with exciting smartphones generating even more fierce competition for the consumer's attention.

Now let's pass the ball to you. Feel free to tell us which was your favorite GSMArena article (review or news) for the past year.

I don't want any apple phone or apple product for that matter. Take the iPhone for example. That's a very basic phone compared to Android. The Galaxy S series is far superior than any iPhone ever released. I like features. Features make possibilities...

This article just goes to show that Samsung fanboys are way, way more curious of Apple products than anyone else. Look, they try to click on any Samsung product as much and as often as they can to make them number 1 on the ratings, but can't quite re...