Lenovo went big on modular last year, churning out a few phones with the ability to connect to a number of cool accessories.

They snap seamlessly onto the Moto Z through a few strong magnets and start communicating hassle-free via the pins on the lower back of the phones.

This isn't the completely modular Project Ara but it still could add a lot to the user experience. With Moto Mods the Moto Z can get a new style cover, a longer-lasting battery, a new spanking speaker or even a completely new camera. And there's no telling what other accessories partners can come up with.

Initially the Moto Z series came out with a few clever add-ons - the offGRID Power Pack battery, the Insta-Share Projector, the JBL SoundBoost speaker and the star of this article - the Hasselblad True Zoom camera. 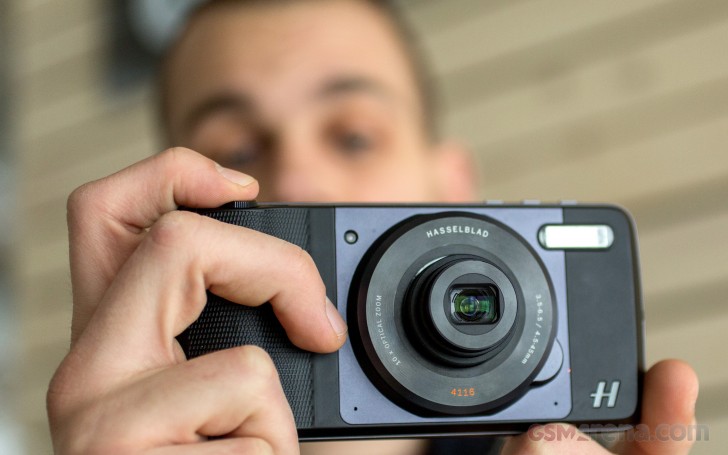 Made by Photography pureblood Hasselblad, for its 75th birthday, the True Zoom adds a separate sensor and optics to the Moto Z. The True Zoom module has a 12MP 1/2.3-inch sensor with a 10x optical zoom 25-250mm (in 35mm equivalent) f/3.5-6.5 lens. The individual pixels are decently large at 1.55 um (microns) - the same size as the Google Pixel's large, ahem, pixels.

The Hasselblad True Zoom has the same footprint as the Moto Z it's attached to. Because of this it fits perfectly onto the back of the Moto Z.

The True Zoom is 9 grams heavier than its host phone (though that would vary depending on the Moto Z you have - Z, Z Force or Z Play). 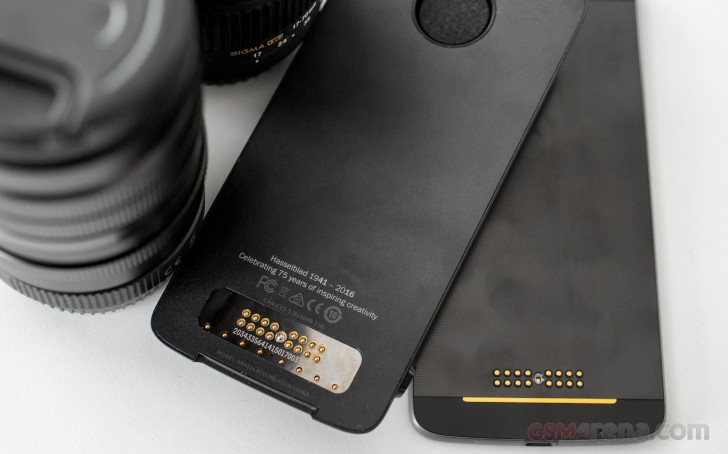 Basically True Zoom is a point-and-shoot camera that you can slap to the back of your phone. There's a large lens ring in the middle of the Mod but the actual lens inside is small. The lens extends to about 3cm from the Mod at its widest and goes to around 4.5cm at its telephoto end.

There is a Xenon flash on the True Zoom and a large grip. There's a two-stage shutter button, a zoom ring on top of it and the power button that turns the Mod on. 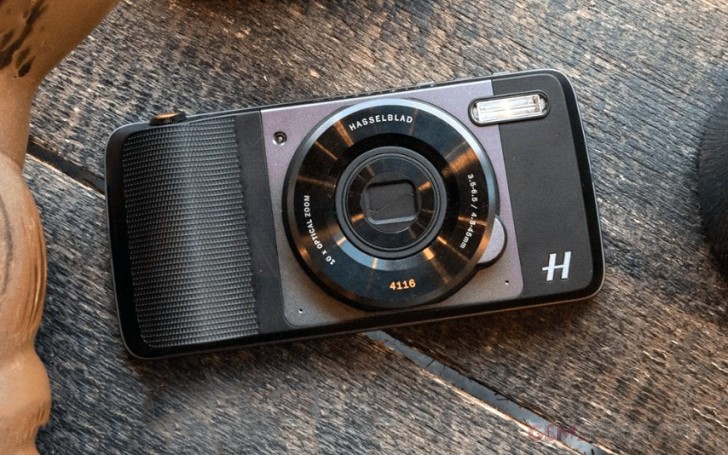 An inconvenience of the Hasselblad True Zoom is that despite its hefty weight it lacks a battery of its own and will drain your phone's battery. With a Mod of this size it would really be nice to at least have a few extra hours of juice, not a few less.

Once you attach the True Zoom to the Moto Z it immediately recognizes it and starts using it as the main camera. This means you can use the True Zoom for Instagram and any other app on your phone.

Once you push the power button the True Zoom springs to life - the lens extends and the viewfinder lights up.

The interface has a few controls for the shooting mode, the timer, the flash settings, a toggle to move to the front camera and a toggle to go to Video capture, Panorama or Pro mode. 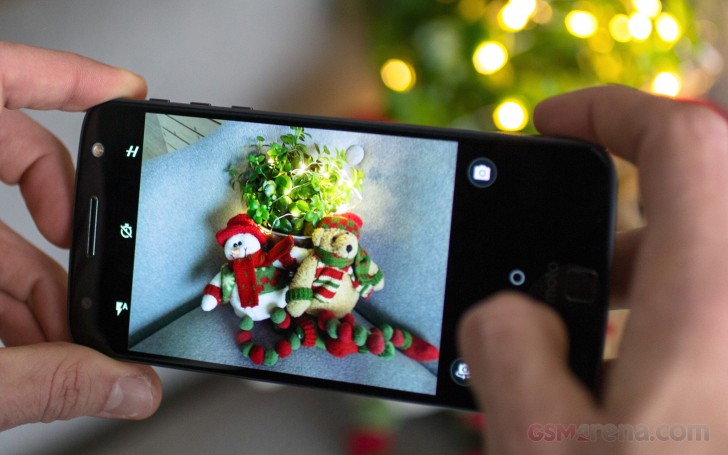 There's a little Hasselblad mode for scene selection - Sports, Night Portrait, Landscape, Backlight Portrait and Night Landscape. It's through this menu that you can enable DNG RAW capture. The Hasselblad True Zoom isn't very consistent in its operation though. We tested it on both the Moto Z and Moto Z Play and had the same issues - slow operation and random freezes.

Sometimes the Mod works just fine - it's quick to turn on (and off), snap pictures and zoom in and out of its 10x range. But other times we would press the power button 3-4 times before the Mod started working.

On some occasions the mod would be very slow to zoom - at times it would even zoom a few seconds after we pushed the zoom lever.

Focus is slow to lock on throughout the zoom range. The Moto Z and Moto Z Play are noticeably faster to focus with their built-in cameras.

On a positive note the optical stabilization works equally great at 25mm and 250mm, we rarely got a shaky image.

The 12MP images from the Hasselblad True Zoom have a few good things going for them and a few negatives. Images are detailed throughout the zoom range and have good sharpness in all but the extreme corners of the frame. The 10x zoom is the key selling point here - it's unmatched on any smartphone these days. 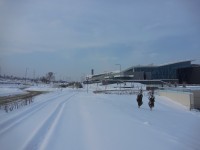 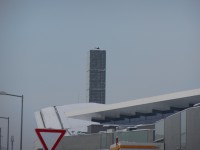 There's softness in the corners not only at the widest end but at the telephoto too - that's a sign of low-quality optics. Dynamic range is limited and images come out slightly underexposed.

The True Zoom doesn't shoot below 1/30s which combined with the slow aperture means the camera will resort to using high ISO in situations where light isn't enough.

Images are noisy even at ISO 100 and in good light. There are plenty of artifacts in solid colors. Noise becomes even more of a problem as light conditions deteriorate. 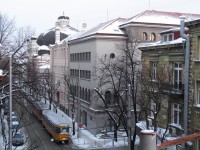 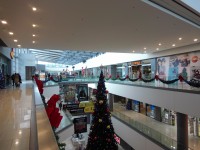 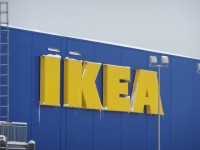 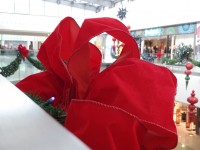 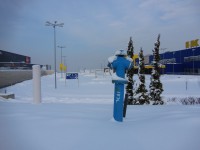 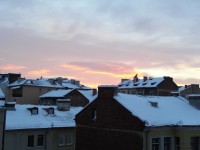 White balance tends to err on the cold side and struggles to produce good skin tones. The True Zoom is good for portraits when you shoot at 250mm. Zoom range aside, the biggest advantage of using the True Zoom Moto Mod is the Xenon flash - it's amazing. We tried it in a completely dark room and the result is as clear as day. The White Balance is more accurate with the flash too. 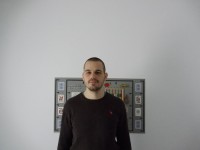 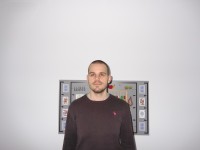 Flash off • Flash on

If you shoot DNG you can, in theory, get a bit more from the sensor. But in reality DNG files lack any distortion correction leaving you with a lot of bendy lines.

There wasn't a great benefit to image quality either.

We decided to compare the Hasselblad True Zoom to the Moto Z as the only reason to use the Mod is better pictures.

Without digging into the images at pixel level we prefer the Moto Z ones. They have a wider dynamic range and better color balance which makes them more pleasing to the eye.

When we zoom in the True Zoom has a small advantage in resolved detail and a clear lead in sharpness. But the images produced with the Mod are also noisier.

Still, if we have both the Moto Z and the Hasselblad True Zoom at hand on a trip we'd use the Moto Mod for stills, despite the noise and colors.

Its images are sharper and have slightly higher detail and nothing can beat a 10x zoom range and superb Xenon flash for landscape, landmark and people shots.

But if our main target are snaps of important memories or social media sharing (Facebook, Instagram, Snapchat) the Moto Z camera is more than fine. 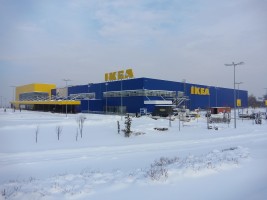 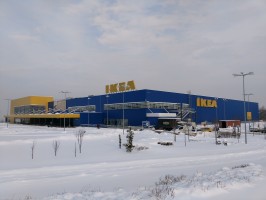 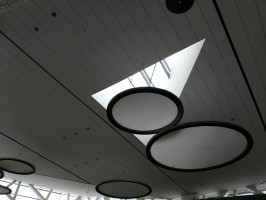 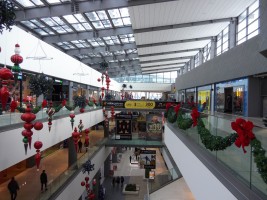 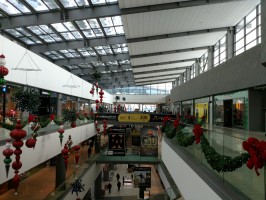 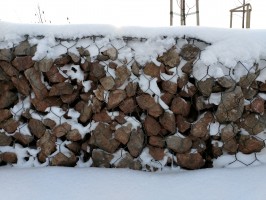 The Moto Z also has an advantage in video - it lets you shoot at 4K resolution, the True Zoom can only do 1080p. And the video itself isn't impressive - it's very noisy, lacks detail and using the zoom leaves to a horrible noise penalty.

Okay, summary time. We like the Hasselblad True Zoom for its boldness and creativity. We remember Samsung's point-and-shoot-slash-smartphone Galaxy S4 Zoom and Galaxy K Zoom as creative but ultimately unimpressive in terms of image quality. In contrast you can use the True Zoom when you want and remove it when you don't. This is what makes modular technology great.

But this Moto Mod comes with a few significant caveats. For starters it's expensive - at around 300 euro it's priced higher than some dedicated point-and-shoot cameras that either have more megapixels, more zoom or both. 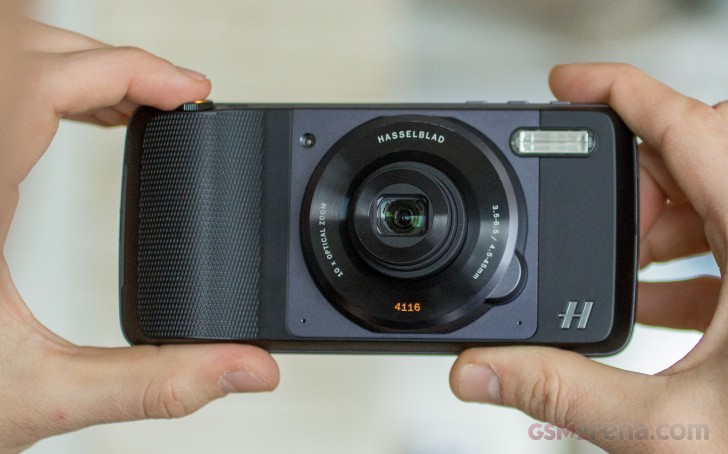 The second issue is image quality - the True Zoom isn't a much better camera than the Moto Z's 12MP snapper. Unless you really need to have a 10x zoom range and a Xenon flash the Moto Z will be all you need for capturing those precious moments on the go.

Third - the Hasselblad Moto Mod only works if you have a Moto Z series smartphone on hand. Lenovo has said that the Moto Mods are future proof and will work with upcoming Z series smartphones but that still makes the Mod viable for just these devices.

Finally the Hasselblad True Zoom isn't very consistent. The slow-downs and the random freezes are a huge turn down.

If you have a lot of cash to burn and you consider a Moto Z smartphone a key accessory to your daily routine - buy the True Zoom and enjoy overall good image quality, a handy zoom range and a powerful Xenon flash.

Otherwise just buy a good point-and-shoot camera and you're good to go.

How about a larger sensor and less zoom?

Thanx for information. I have been in a very big understanding.

this is a little old but just wanted to mention in case anyone is reading it... the lumia did not have any optical zoom. only digital... just don't understand why it needs 3 posts to say the same wrong things three times... so no, no optical zoom for...