The Mediatek Helio X30 chipset (internal designation MT6799) has been official for a few months now - 4 and a half, to be somewhat more precise, but we're yet to see a production device powered by the Mediatek beast of an SoC. Well, this is set to change soon, as test devices with the X30 have started appearing on GeekBench.

A number of differently named devices have run the benchmark, but none sounds like an actual consumer product. Still, it's good to see what these pre-production units are capable of, if for nothing else but an indication of what to expect from the X30. 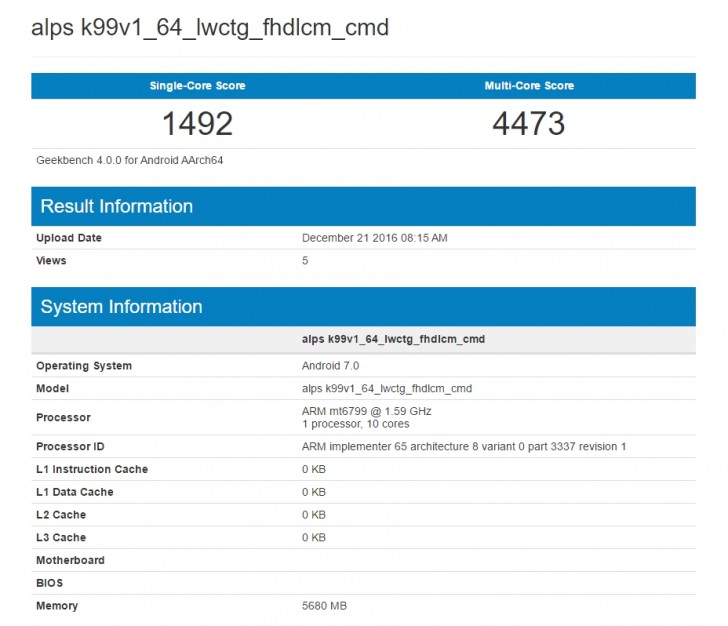 Well, the test numbers aren't all that impressive - a single-core GeekBench 4 score around 1,500 is lower than the majority of Snapdragon 820 phones we've tested, and there's the S821 now which posts even higher numbers. The Huawei Mate 9, then, which utilizes the same 4x Cortex-A73 cores in its CPU, manages a much higher single-core result at around 1,900 points. In multi-core the Helio X30 test unit outperforms all the Snapdragons, but is still no match for the Mate 9, not by a long stretch.

Here's the plot twist though - the benchmark listing reports that the deca-core CPU of the device is clocked at 1.59GHz. Even if the number in that field is typically the lower clock rate of the different clusters (of which the Helio X30 has three), the press release of the chipset stated a 2.0GHz frequency for this dual-core efficiency-targeted cluster.

You got it, then - in its final form the Helio X20 will be more powerful than what these tests show.

Helio x30 at 1.59 GHz scores more than 1500 in geekbench 4 its actual frequency is 2.8 GHz it should score more than 2200 single core geekbench 4 easily, this is initial test result don't take it seriously the lowest frequency in helio x30 is 2.0 GHz...

Didn't you read my comment? Explain to me how a worthless A9 suddendly became more powerful than SD821 and I bet even SD830/835 or Exynos 8895 in Geekbench? If you look at other benchmarks, A9 is simply pathetic in comparison.