Henry Cavill posted a picture of his new Microsoft Lumia 950 and he is already "loving it". It's unclear if Microsoft sent him the phone as a gift, paid him to advertise it or he just bought it by himself because he is a fan, but it doesn't really matters.

What's important here is that Superman uses a Lumia 950. He shared this info on Instagram and it sure made for some interesting comments. 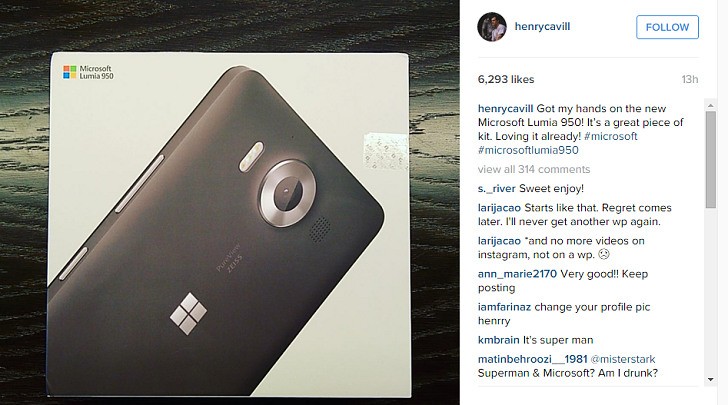 This is not the first time we are seeing (super)heroes advertising smartphones. We all know James Bond is an avid Sony users, Captain Kirk used a Nokia, the Avengers has been digging Samsung, while Robert Downey Jr. preferred HTC.

So, Superman is now a Lumia fan. Now we are interested what Batman/Ben Affleck has to say. Hopefully those two won't be fighting over smartphones in the upcoming versus motion picture.

Easy. Hint: If brands were treated as easter eggs, try hunting some on Warner Bros.' TV show, Arrow. The series should fill viewers up with recurring Microsoft products