Here go the official pics of the Samsung Galaxy S II and Tab 10.1

Update:Keep in mind that from the new photos it appears the new Galaxy S will be called the Samsung I9100 Galaxy S II (not 2, as we initially thought).

Now we can finally see what the Samsung's much anticipated Galaxy S II and Galaxy Tab 10.1 look like for real. These new pics show the ins and outs of the two highly anticipated devices that are otherwise due for announcement tonight.. 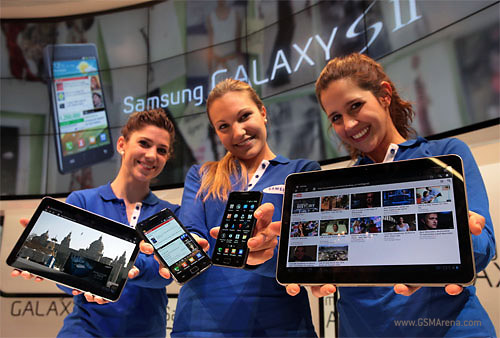 Here are the new, hot photos in question of the Samsung Galaxy S II and Galaxy Tab 10.1.

And now here are the hot images of the Samsung Galaxy Tab 10.1.

From the photos above, our guess that the new 10.1-inch Galaxy Tab is going to run Honeycomb has been confirmed. No new details on both devices have emerged, yet.

Don't forget to tune back in at 6:30PM CET (GMT+1), we will liveblog straight from Samsung's event.

I hope that Samsung won't forget about the good manners and allow us to change the batteries - not as in the Apple-Nokia crap. Let's all pray for this! And yes, let's pray that further Apple "smart" innovations won't spread like the fl...