The Samsung Galaxy Tab S4 has been spotted in benchmarks several times and has also received certifications like WiFi, Bluetooth, and FCC. However, we didn't get to see the device all this while.

Well, that changes now, as an official render of the tablet has leaked, showing both its front and back. 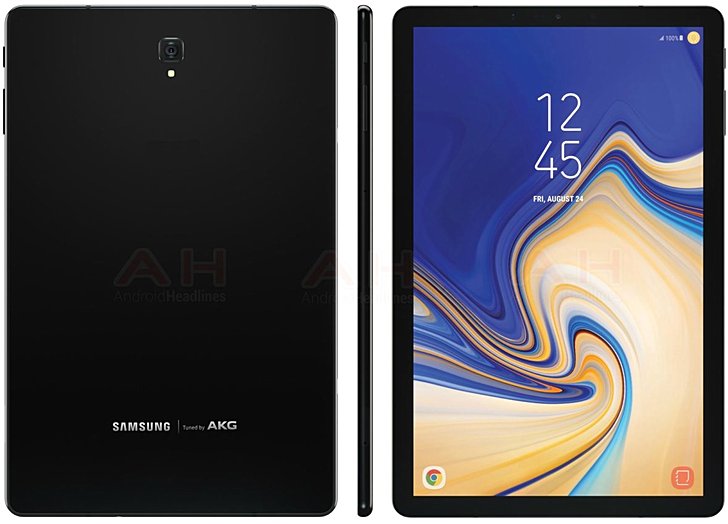 The first thing that catches attention is bezels, which are relatively thinner when compared to the Galaxy Tab S3. This, along with the fact that there's no physical home button this time around, means larger display area, hence a different aspect ratio as well.

Missing home button also raises questions about the placement (or even existence) of a fingerprint sensor. Will Samsung go for under display fingerprint sensor or will the sensor be side mounted? Or, will there be finger print scanning at all?

Anyway, what else we see? There's a front-facing camera, along with other sensors - Iris scanner could be one of them, as the feature has already been rumored for the tablet. The functionality could also compensate for missing fingerprint scanner (if that's the case).

Moving on, we see the power and volume buttons on the right side, rear camera with an LED flash, as well as "Tuned by AKG" logo along with Samsung's own at the bottom rear. It's worth mentioning that logo positioning was a bit different on the back panel revealed by FCC.

Memory configurations suggest only 4GB/64GB for now. The camera department is handled by a 12MP rear and a 7MP front shooter. The battery is rumored to have 7,300mAh capacity, and Android 8.1 (Oreo) should be running the show. Support for Samsung DeX is also rumored.

As for availability, there's currently no confirmation, but if the date (August 24) on the device in the leaked render is anything to go by, we may see it getting unveiled on the sidelines of IFA 2018.

Such a tablet (with a 10.5"+ screen) should be used in the horizontal orientation, not vertical. But it looks like it was made for vertical, which was a poor decision.

Finally, Samsung getting back on track since the original Tab S, with the proper 16:10 awesome display! I have been waiting since then (4 years ago!) to upgrade, avoiding the i-clones, with the annoyingly squarish 4:3 ratio!