As screens and processing power grow, smartphones are eating steadily into dedicated SatNav units market lately and there’s nothing unexpected about that. There are dozens of navigation apps available for different platforms and once they got those GPS receivers sensitivity right, there was just no reason to carry two devices anymore.

The Ovi Maps-powered Nokia C7 is the leader here. Ovi Maps probably isn’t the best available app, but it’s good enough and carries two key features that its rivals lack. It’s free all around the world and all its map data is available for offline use (data plans are not that cheap – especially when travelling abroad).

The N8 itself offers a screen large enough to be easily visible when placed on your dashboard and it still remains perfectly legible in bright sun (a real must for a SatNav unit).

Samsung I9000 Galaxy S is another device that boasts a similar (as a matter of fact even better) screen and a free navigation solution. The problem here is that Google Maps navigation is only available in selected countries and requires internet access at least at the time of route planning, which makes it less versatile.

Those who appreciate a bigger, brighter screens were treated to a pile of new offerings this year. They say once you get used to a huge display, there’s just no turning back so if you have been among the HTC HD2 adopters, you probably already considered the winner in this category – the HTC Desire HD. 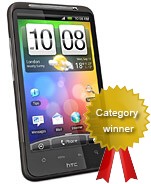 At 4.3” the new HTC Android flagship is only beaten by the Dell Streak, but we do believe 5” is already going into tablet territory so we are leaving it out here. The HTC HD7 is supposed to have the same screen as the Desire HD but we’ve come to realize that our test unit is plagued by severe ghosting so we won’t be recommending this one either.

If you are willing to go just a little bit lower – to 4” you will get the chance to experience the Super AMOLED goodness of the Samsung I9000 Galaxy S. It might be a bit smaller than the Desire HD but it offers superior image quality so it might just be worth it.

Or you could go for the extra resolution of the Sony Ericsson XPERIA X10 and live with the LCD shortcomings. You’d be saving yourselves quite a few bucks too.