Honor 10 Lite to arrive on November 21 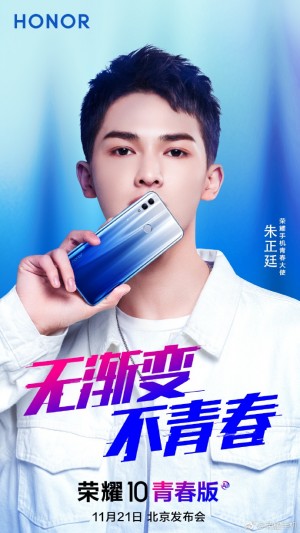 Huawei and its subsidiary Honor are among the top smartphone companies for a very simple reason - they produce devices that position throughout the whole price spectrum. If you want a flagship but the Honor Magic 2 slider is not your cup of tea, while Honor 10 is too expensive, there is a cheaper alternative on its way. The phone will be called Honor 10 Lite and will arrive on November 21 at an event in Beijing, China.

It appears the new phone will be a completely new device and not just a rebranded Huawei handset. The back panel follows the design seen in the Honor 8C, Honor 8X and Honor Note 10 with a vertical AI dual camera setup in the upper left corner and a fingerprint scanner on the back.

The date announcement caught everyone by surprise and surprisingly, the rumor mill has nothing on the specs of the Honor 10 Lite. We’ll try to make an educated guess that the new phone will have a Kirin 710 chipset and a notched screen with 19.5:9 ratio. It will likely have a huge battery with an 18W fast charging and hopefully will have EMUI 9.0 based on Android Pie out of the box.

Hope it good at camera. Honor 9 lite camera is not as expected