Honor 10 Lite is arriving next week and we know pretty much all the specs. We saw in the first teasers, posted by the company on Weibo, that the new phone will have a gradient back, and thanks to an already airing TV commercial, we know what the phone will look like too.

The camera positioning and the fingerprint scanner are similar to what Honor implemented in its 8X, but with rounded edges of the rim for better grip. You can see the Honor 10 Lite lacks any writings on the back - neither Honor nor the AI Camera label. This makes us wonder if the company is going for a clean look or this is just a promo device and the retail units will have writings on the panel. 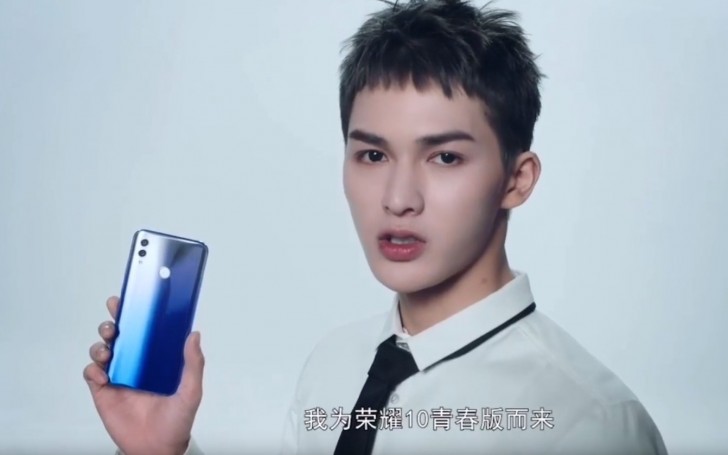 Color-wise we see an addition to the Blue-White gradient, revealed in the promo teasers. There will be also “Passionate Red” and the CPOP star boldly says in the video that “no gradient means no youth”, suggesting plain colors are for old folks. While the parent company Huawei has already boarded the gradient hype train, the subsidiary Honor is still running behind with only two devices coming with a colorful back - the Honor 10 and the recently announced slider Honor Magic 2.

The 6.21” device will be unveiled on November 21 in Beijing, China, and that’s when we expect the curtain to lift for the last unknowns - memory configurations, pricing, and availability.

Although he's kind of plasticy, I would like to pat his bum.

I did saw the video. I am still not sure because video was not very clear.

Not all youth like the notch and gradient matter of factly