The Honor 20 series premiere couldn't have had a worse timing - the phones went official just as the Trump administration in the US imposed a ban on US-based companies from working with Huawei - Honor's parent company. This cast a serious shadow on the future of these phones even before they were released so their launch was naturally delayed.

The imposed restrictions did not interfere with the release of the Honor 20 as much as they did the Honor 20 Pro so the former is already on sale. And regardless of how the US ban situation pans out, the Honor 20 will keep getting security updates and access to the Google Play services.

For the first time ever Honor broke their pattern and announced not one but two flagships - the Honor 20 and Honor 20 Pro. They differ not by screen or chipset, but by their camera and storage configurations. The Honor 20 loses the telephoto camera and comes with half the Pro's storage and less RAM. That's pretty much it. Oh and it gets a nice discount along the way. 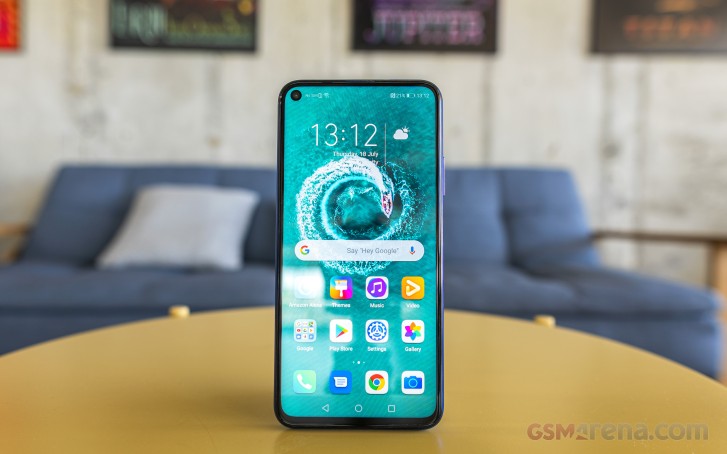 But let's start from the beginning as not everyone is familiar with the Honor 20 Pro.

The Honor 20, just like the Pro, has this so-called Dynamic Holographic signature design and no matter the color option - it's quite stunningly looking. Honor hasn't spared resources on the looks, and nor did on materials - the Honor 20 is a dual-glass smartphone with an aluminum frame. 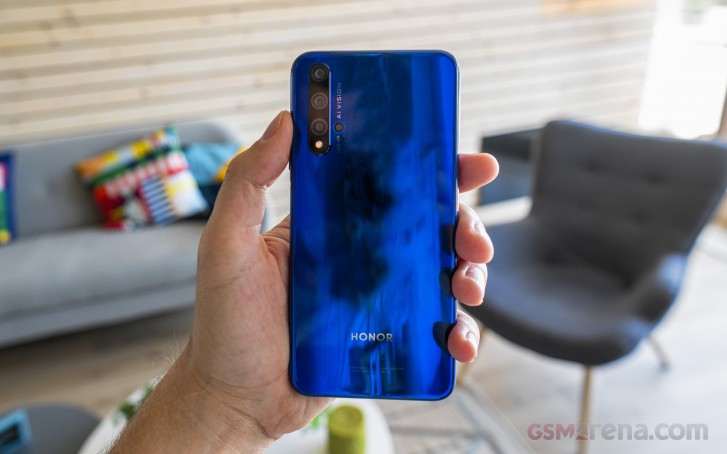 The Honor 20 specs are worthy of a flagship - there is a 6.26" IPS LCD screen with a small hole for the selfie camera, the latest Kirin 980 chipset with 6GB of RAM, and a quartet of cameras on the back - 48MP main one, a 16MP for ultra-wide shots, a 2MP macro shooter, and a 2MP depth sensor. There is no OIS on either of these, though.

And just like the Honor 20 Pro, the Honor 20 has its fingerprint scanner mounted on the right side, which is unusual for the brand but it's not something unseen.

A few things are missing on the Honor 20 spec sheet - an audio jack, a memory expansion slot, and if we have to be particularly picky - dust and liquids ingress protection. But considering the somewhat affordable price tag, we'd forgive the lack of water resistance.

The Honor 20 biggest concern was the lack of Google certification for Android OS. Well, the matter is now resolved, and Honor 20 has full access to the Play Store, runs on Android Pie and will have no issues with future updates. Indeed, the harm is already done, and Honor has probably to answer this to every single potential customer, and that's why we are also saying that in advance, just in case.

Being an affordable flagship, the Honor 20 retail bundle is rather modest. Inside the paper box you will find a 22.5W-rated charger and a USB-C cable that's needed for the Super Charge to work. 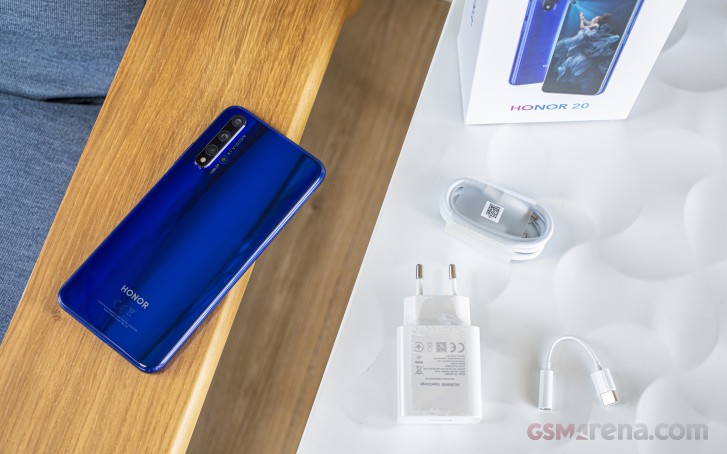 There is no protective case supplied for the European market, though we cannot say this is the case for all other regions. There is a thin screen protector that's applied on every phone in the factory though, and our Honor 20 did come with one, too.

Can someone confirm that Honor 20's screen is NOT Gorilla Glass??

I using honor 20 last 6 month I get 5 star this phone its all good camera, profamence or battreylife all very good work every time