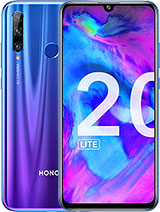 YOU huawei has kirin 980 and even kirin 985 for flaships phones.

Honor 10i is already out in Russia and you may watch videos for box opening etc on Rusian sites. Even though I do not understand Russian, I have found them useful. The price is nearly 305 USD.

Too many similarly-specced Huawei/Honor phones on the market, not even sure which is best.


All these phones above are running on Kirin 710, has Full HD display and more or less similarly designed. How to choose the best one?

I wish someone can make a proper comparison on these and rank them.

Anonymous, 20 Mar 2019how many different honor phone are they gonna make ? whats the point anymoreIt's a company, they can produce as many as they like

how many different honor phone are they gonna make ? whats the point anymore

I hope you respond soon ..

Very adorable phone.
Oh wait micro USB and jack.
I am taking my words back sadly :-(

Instead of releasing the same phone ( honor 10 lite with a different name)with barely a slightly better camera, they could have ditched that old thing called Kirin 710 which can't even compete with the old snapdragon 660

i think it have same specifications of huawei nova 4e

I swear to god honor/huawei, if this phone still uses microusb i won't even think of buying it!

Total of 74 user reviews and opinions for Honor 20 lite.
ADVERTISEMENTS