The Honor 30S has passed through AnTuTu ahead of March 30 unveiling.

We already know the Honor 30S will pack the 5G-ready Kirin 820 SoC, and now the benchmark database reveals it will come with 8GB RAM, 128GB storage and FullHD+ screen. The smartphone will run Android 10 out of the box, which is likely to have EMUI 10 on top.

AnTuTu reveals that Kirin 820 includes a total of eight CPU cores - four Cortex-A76 big ones and four power-efficient Cortex-A56 ones. It packs the Mali-G57 GPU to handle gaming and video editing.

Additionally, AnTuTu gives us an idea of the Kirin 820's performance by sharing a chart which compares the SoC with the Kirin 810, Kirin 980 and Snapdragon 765G chipsets.

The Kirin 820 comes closer to the Kirin 980 in CPU tests but falls slightly short in GPU performance. However, it beats the Kirin 810 and Snapdragon 765G in both CPU and GPU prowess. You can check out the chart below for a detailed comparison between the four chipsets. 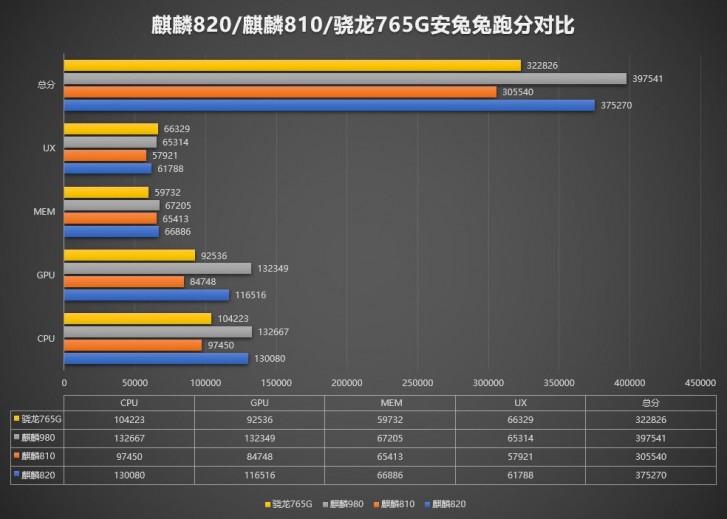 Hahahaha they don't know, because they looking only on those sintetic benchmarks. I agree 100% with you

Really you don't know what are you talking about

Huawei advanced their competition a little bit, and was the first to use ARM's Cortex A76 cores in 2018, which is very unfair for it to get compared to the Snapdragon 845, which only uses the A75. Obviously CPU performance goes to Kirin 980, but g...