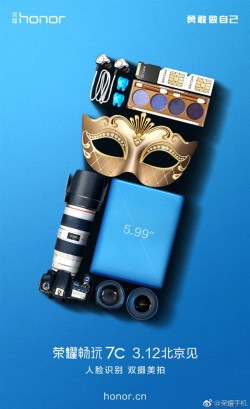 The Honor 7C passed through TENAA last month on its way to becoming official, and today we've found out exactly when that will happen. The online-first Huawei sub-brand posted the image you can see to the left on Chinese social media.

The promotional poster says we should expect the Honor 7C to be announced on March 12, and come with a 5.99" touchscreen and a triple slot housing two SIMs and one microSD card. Oh, and it also boasts a dual rear camera of course.

As per TENAA's listing, that display will have 1,440x720 resolution and the increasingly trendy 18:9 aspect ratio, while the dual cams on the back have 13 MP and 20 MP resolution. The selfie shooter is an 8 MP unit. You'll get either 3 or 4GB of RAM and 32GB of storage.

Huawei is becoming the new Samsung Releasing phones every other week

C- series is a entry level budget phone, so don't expect much

Anyone else think theres a hint with the three lenses, normal, wide-angel and tele-photo. May we see a three kamera set-up her?