We've come to accept Honor devices as being great value. Relying on proven technology from its parent company Huawei, the Chinese brand has been consistently focused on bringing very good specs at tempting prices. That's no easy task, yet Honor makes it seem almost effortlessly natural at this point, with devices like the Honor 7X.

Huawei's current Mate lineup already offers great value in the high-end segment, with the Mate 10 and Mate 10 Pro, as well as in the large screen mid-range, in the face of the Mate 10 Lite. 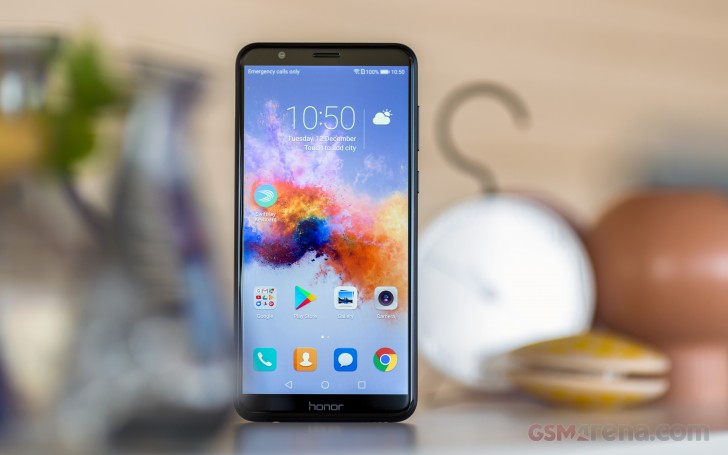 However, it doesn't really take more than a quick specs comparison to see that the Honor is positioning the 7X as an almost identical offer, both hardware and design-wise and at a price point lower than the 350 euro or so the Mate 10 Lite sells for.

Sure, you might be missing out on some selfie extras and a few other small details here and there, but in the US, Honor 7X is launching at just $200 - a whole $50 less than its Honor 6X predecessor at launch. Europe is getting less of a bargain, but still not that terrible.

Of course, no phone is without its faults. We would have loved to see a USB Type-C slot on the Honor 7X. While at it, NFC support to power contactless payments would have been a nice touch as well. Still, in the grand scheme of things, a lesser known brand seems to be enough to save you a pretty penny on some excellent Huawei hardware and software package. A deal we would gladly take any day of the week.

A simple, sturdy, two-piece cardboard box - that's what we like to see from value-conscious devices and that's exactly what the Honor 7X ships in. Nothing too fancy, but we do dig the greenish-blue color Honor went with. It really makes it stand out. 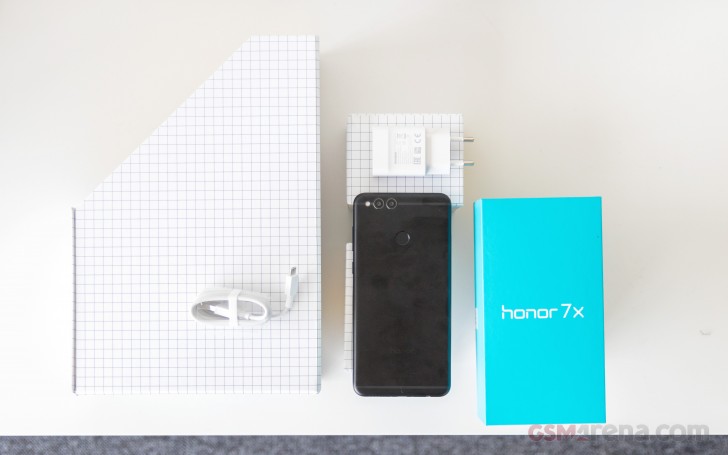 Removing the top part reveals a single compartment that only houses a wall charger and USB cable. Unfortunately, it's the microUSB type and not the newer, reversible Type-C port. The charger is rated at 10W or 2A@5V, which coincidentally is the maximum power the Honor 7X will charge at.

A metal unibody and a glass front - it might be overused, yes, but we still think it's a timeless look. The Honor 7X pulls it off magnificently in every aspect and we'll enjoy every bit of it, before the iPhone-inspired wireless charging-friendly devices come pouring in. 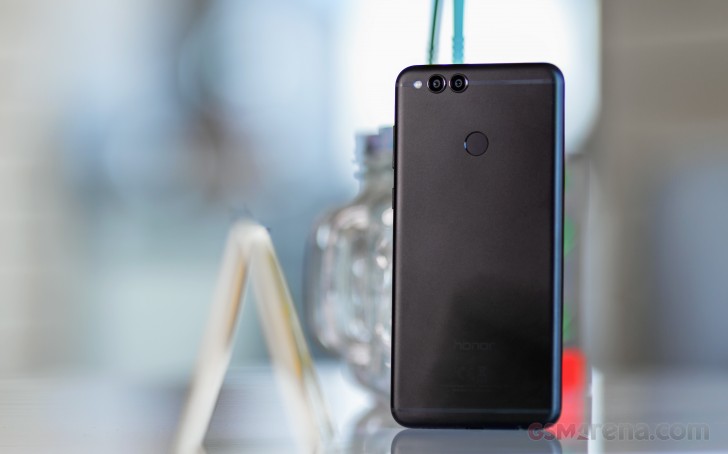 The Honor 7X has extremely flush and natural curves, quite reminiscent of an iPhone 7, or a couple of its predecessors.

The phone is a pleasure to hold. Not only that, but Honor has really managed to step up its game when it comes to materials and build quality.

The phone barely flexes under pressure and feels as solid as a rock. Past Honor devices have always been sturdy in their own right. This frame, however, is one of the sturdiest we've ever seen on a phone of this price range.

Of course, on the flip side of things, a metal back does mean no wireless charging and requires the presence of antenna lines. The latter, however, are blended in really well with the rest of the body and this is true regardless of the finish you choose - blue, gold or black.

Honor 7X from the back

The only other exterior segment on the Honor 7X is a 2.5D front glass, which tucks away neatly into the frame itself, which is another really pleasant design choice. It's a Gorilla Glass but Honor doesn't reveal which generation.

Whatever the glass may be, the better part of the surface underneath it is occupied by a trendy new extra-wide, 5.9-inch, 18:9 panel. We really appreciate Honor stuck with FullHD, instead of saving a few bucks by going with a lower resolution. But, more on that later.

The side bezels around the panel are quite thin, but nothing we would consider bezel-less. The top and bottom chins are quite reasonably sized as well.

Besides the selfie camera and speaker, the top one also houses a notification LED. The bottom one only has an Honor logo printed on the underlying surface in a very Huawei fashion.

On the left side of the phone there is a single tray that houses a regular and hybrid SIM slot on the Dual-SIM model, or substitutes the latter for a dedicated microSD one.

On the opposite side - a volume rocker near the top and a power button beneath that. Both easy to reach, "click-y" and well defined.

The top of the Honor 7X is pretty empty, save for a tiny hole for a secondary noise-cancelling microphone. On the bottom - the microSD port, we already whined about along with the single speaker. In all fairness, we can't realistically expect a stereo setup at this price point.

Thankfully, what is included is a good old 3.5mm audio jack.

A rear-mounted fingerprint reader is also part of the mix. In keeping with its solid reputation in this area, Huawei equipped the Honor 7X with a very snappy and accurate scanner. Naturally, it is always-on and can unlock the phone from standby. No complaints there.

In may will be 3 years my honor 7x. Works like new. Battery works good - like 80 % new. - I charge battery all time without healthy batery using principes......

Where is 2nd sim slot