At an event held in San Francisco, Honor has launched the Honor 8 for the US market. The handset was first unveiled in China a little over a month ago. The device mirrors the same dual-12MP camera setup first introduced with the Huawei P9.

The Honor 5X marked the Chinese maker's first entry into the US market back in February targeted at consumers who prefer value over flashy and overpriced hardware. Honor continues to cater to the value segment in the US by offering the Honor 8. It's a decently priced handset with a broad set of high-end features. 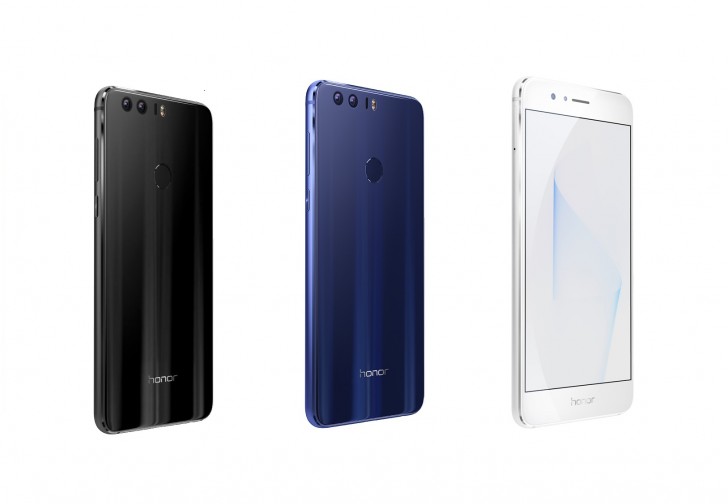 The Honor 8 features a 5.2-inch 1080p display with 2.5D glass on both sides, and its powered by the same chipset as the Huawei Mate 8, the fast and efficient HiSilicon Kirin 950 processor.

The phone's base storage configurations include 32GB and 64GB models, but you should be able to expand that up to 128GB via the microSD card slot. The microSD card tray also houses a second nanoSIM, so you'll have to choose between using two lines and using a single line with a microSD card. The US version is NOT dual SIM.

The design of the Honor 8 is reminiscent of the Galaxy S6 era, which involves beautiful phones, crafted from mostly reflective glass except for the screen. The Honor 8 is no exception; it reflects light so gracefully that you can only appreciate it in its real beauty when you see it in person. Honor claims that theer are no less than 15 layers on the back allowing for the beautiful reflections.

The Honor 8's packaging alone is representative of Honor's departure from more industrial metal builds towards a beautifully crafted glass construction. The packaging is unlike any that I've seen before. Rather than opening the box and seeing the phone sitting right on top, it has been inserted into the middle of the box. So let's slide it out and see what's inside.

Once you slide the smaller compartmented box out of the larger box, you can empty the rest of it.

The phone slides out of its compartment easily. The Honor 8 will come in 3 different colors for the US: Pearl White, Midnight Black, and Sapphire Blue. We received a Sapphire blue unit and it's a gorgeous looking paint job.

The Honor 8's slightly tapered glass slabs help with the ergonomics of the phone. Even though the handset is made of 2.5D glass on the front and the rear, the edges don't feel sharp at all. Honor's decision to use a 5.2-inch screen seems counter-intuitive considering 5.5-inchers are gaining popularity, but at the same time, it's a nice that's underdeveloped. There aren't that many other current smartphones in this price range that offer a 5.2-inch screen (at least in the States).

The left side of the phone houses a hybrid-SIM tray which can accept either: two nanoSIMs, or a nanoSIM and microSD card. The right side has the power and volume rocker keys. The bottom side features the loudspeaker (with speaker holes reminiscent of the iPhone) and a mic for phonecalls. Next to that is the USB-C port, and opposite the speaker is the 3.5mm headphone jack.

The top of the device brings an IR blaster, an underrated feature which a few other OEMs seemed to have forgotten about.

Bringing it around to the back, there's a bunch going on. We'll start with the camera, the same dual-12MP camera setup that is found on the Huawei P9 has made its way to the Honor 8. There's a laser focus sensor which combines with the dual-focus system that the Honor 8 has. The company says the dual cameras can focus on objects like two human eyes. There's also a dual-tone LED flash. It's also worth noting that the camera does not protrude at all, the cameras have been placed behind the rear glass to be perfectly flush with the rest of the body.

Below the camera setup on the back there's a rear-mounted fingerprint scanner which also doubles as a function key to perform general functions. You can even use it to instantly launch an app. There are three assignable actions: single press, double press, and press-and-hold.

The Honor brand is totally redefining itself with new and welcome design changes. Although, the Honor 8 could benefit from a slightly more aggressive pricing, say $350 for 32GB or $400 for the 64GB. Granted, that's the current net price if you pre-order the device, but it will be higher after launch.

The Honor 8 is quite reminiscent of the Galaxy S6's design when it was first launched. Regardless, it is a beautiful device which has an amazing way of reflecting light. Under the right lighting, the Honor 8 shines beautifully, and photos don't do it justice. 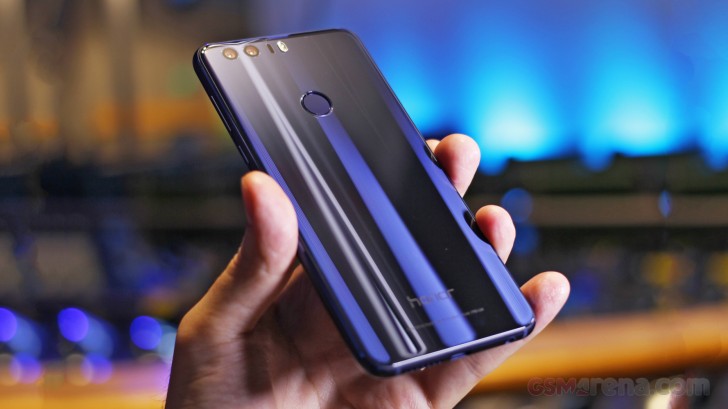 The Honor 8 is now open for pre-orders in the US at Amazon, Best Buy, B&H, Newegg, and HiHonor's online store. Those who pre-order the Honor 8 from participating retailers will receive a $50 rebate in the form of a gift card.

We are excited to see Honor's future in the US. The Honor 5X was geared quite well for a $200 smartphone. Based on the price-point alone, we can't predict whether the Honor 8 will have similar success to the Honor 5X, but we are excited to review the phone and see what this baby can do.

Just got this phone three days ago since I needed a dual-SIM phone. It is by far the best phone I have used, period. Only the design, which is phenomenal when it comes to looks, could be more practical in my opinion. Meaning that this is too much sim...

but it works, i have sony and update every 3 months, and dont works..

the baddest thing about Huawei is updating>> I have a P7 for more than one year and never get any update...haaaaaaaaaaahhaaa do you believe that!!!