Honor is preparing its next midranger, called 9X, and expectations are to match the success of its predecessor Honor 8X that reached 10 million units sold - faster than any other device from the Huawei subsidiary.

Today George Zhao, the brand CEO, announced on Weibo that the phone will be officially introduced in China on July 23 in the city of Xian. 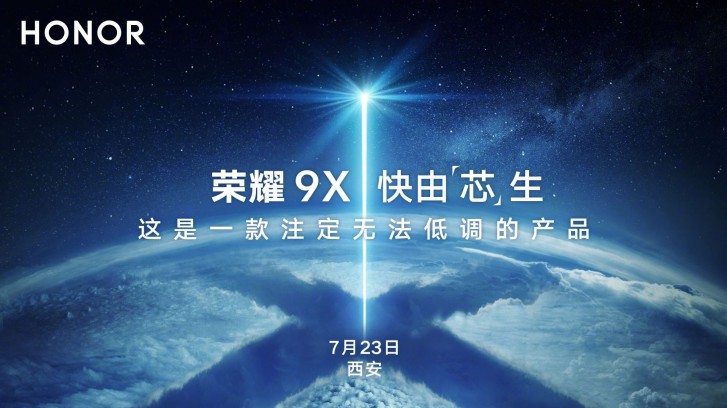 The poster officially says Honor 9X is fast from the inside. Born to be low-key, meaning the device will remain a midranger, but with impressive hardware. Actual specs are still a mystery - the phone was certified at 3C with a 10W charger, but nothing else is known yet.

One rumor suggested the Honor 9X will have a Pro sibling (although no word on a Max follow-up), and it could bring four cameras on the back. We might have a rebranded Huawei nova 5 smartphone, but as history shows us, the X series usually introduces an entirely different design, so the Honor 9X is likely to follow that trend.

I hope they launch the 9x max too. with the same cameras and CPU.

Yes Honor 9x with also a pro variant will be nice. But being 9x the pro should not get the Kirin 980 but rather have the same Kirin 810 but with improved audio 24 bit, speedier charger like 22 watt, improved camera like 48mp, 8mp wide angle and 8 tel...