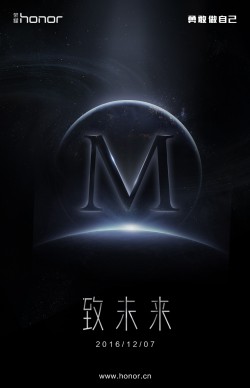 The latest outlandish rumor from China claims Huawei has been working on a 'concept phone' of its own, wanting to steal some of the spotlight from Xiaomi's very well received Mi Mix. That's also supposedly a 'concept phone', and Huawei's device will bear the Honor brand reportedly. This was done so as to not dissuade people from buying the Huawei Mate 9 Pro and Mate 9 Porsche Design - those will still be the most impressive Huawei-branded handsets even after this 'concept phone' is unveiled, since it's using the Honor name.

Speaking of that announcement, it's said to happen tomorrow, on December 7. And the teaser image you can see to the left does confirm that something Honor-related is coming tomorrow. Perhaps the device will be called Honor M.

The rumored details for it are definitely interesting. It will allegedly come with no camera or speaker in the base configuration, with a modular system of sorts allowing you to add such 'peripherals' to the package. The new Honor will employ a curved AMOLED touchscreen made by Samsung and it is said to have a Huawei proprietary fast charging tech that will allow it to go from 0 to 50% in just five minutes.

All of these things do sound pretty hard to believe, but since this is a 'concept phone' who knows, everything you just read may pan out after all. The good news is that we'll find out for sure how much of these rumored details were real in less than 24 hours.

Wow, this fast charging is serious and will be fantastic. But no camera and no speaker is something o. We need camera we need speaker but something tells me that this machine will be great or even greatest.

Where is the article? Lies!

So you didn't read the article?