Honor sends press invites for December 16 event, it's about Magic 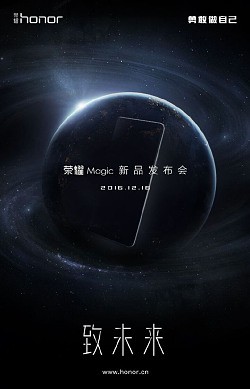 Huawei's sub-brand Honor yesterday released a teaser about a Magic smartphone, purported as a Mi Mix competitor. We were promised more information on December 7 and indeed Honor gave us a few more info bits.

Honor is now officially inviting the press for a special event on December 16. The star of the show will be the Magic smartphone, a concept-like smartphone to demonstrate company's latest innovations.

There is nothing official but the name, though there are quite a few rumors on the Magic. Honor's new fast charging tech (0-50% in just 5 minutes) should be premiering with the phone, and probably another interpretation of a bezel-less display.

Another rumor promises that the Magic device will reinvent the smartphone and come without camera or speaker, but you will be able to add those with some sort of modules. There is also a rumor about a curved AMOLED screen, but you shouldn't take all of those for certain by any means.

There are nine days till December 16, so we'll find out all about the Honor Magic in no time.

Thanks, Steve, for the tip!

Don't be sad you are lucky don't catch any email from faceboou in Chinese language and after you click then.........

Oh yes indeed the Chinese company Huawei will never relent until they reach their target of becoming number one. I have loved Huawei from day one when I owned Huawei phone 4 years ago. It was freezing so much after one year. Every body was condenming...

I completely agree. It is sad to see many sweet phones that can't really be used in the US.