We’ve been seeing plenty of leaks about Honor’s upcoming V30 flagship duo but this new AnTuTu still adds a few useful bits about the Pro model. The Honor V30 Pro appeared with the OXF-AN10 model number and is complete with Huawei’s top-end Kirin 990 5G chipset, 8GB RAM and 256GB storage.

The listing also reveals the V30 Pro is running on Android 10 and its screen comes with a 2400 x 1080 pixel resolution. 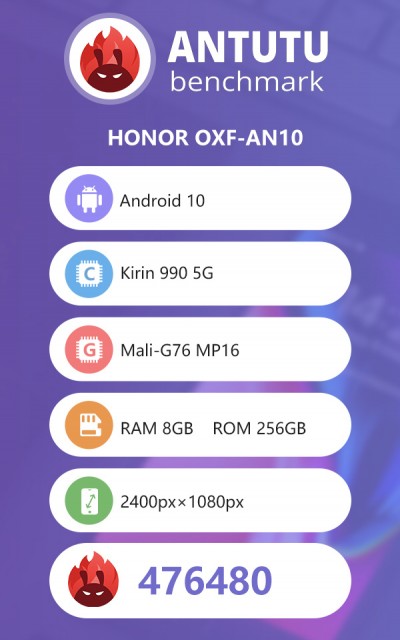 Looking at the benchmark score, the V30 Pro managed a combined result of 476,480 which for reference is slightly better than the Huawei Mate 30 Pro’s AnTuTu score. The breakdown shows the V30 Pro holds an edge in the GPU department but trails in all other categories like memory speed, UX and CPU performance. According to past rumors, the Honor V30 Pro is coming with an OLED display and pill-shaped punch hole similar to what we’ve seen on the vanilla V30. Other speculations suggest a 4,200 mAh battery with 40W SuperCharge. We’re just four days away from the Honor V30 series launch event which is scheduled for November 26 so we'll have all the answers then.

You must be ugly haha

Top notch performance? Not with that unsightly hole in the screen.