Based on a leaked concept document that consists of well over a hundred pages, comes the low down on the revolutionary Windows Mobile 7 OS that will hit devices in 2009. You've probably already heard about WinMo 6.1 being just around the corner with the official announcement expected at the professional Mobile World Congress 2008 (formerly known as 3GSM) held in Barcelona in February 2008.

The v. 6.1 update doesn't bring that many changes though, but Windows Mobile 7 is entirely a different thing. It's the Microsoft response to the revolutionary iPhone user interface that had us right from the first look. Yeah, we know the iPhone is not the uber-device everyone's been expecting, but it has set the bar so high in terms of user interface, that it's jump-started the competing R&D departments industry-wide and changed the whole idea of interacting with your phone.

But we are talking Windows Mobile now, so let's get back to our game. In a nutshell, Windows Mobile 7 will bring to smart devices some much expected revolutionary features such as full touch-based navigation and motion gestures control. And for that WinMo devices won't rely on accelerometers, but instead they will use their front facing cameras to detect movement. You can shake or twist to get the phone doing things.

The new Windows Mobile 7 is designed to be used on devices with touchscreen only, several keys, full QWERTY keyboards, and devices without touch screens. The touch-only devices are specifically referenced as "iPhone compete" in the leaked document.

Windows Mobile 7 is clearly designed for better media playback, with screenshots indicating a much-improved Media Player and photo gallery application. Mobile Internet Explorer runs full-screen web pages in a minimalist interface, and has "tabbed" browsing, except you can switch tabs by shaking the phone. 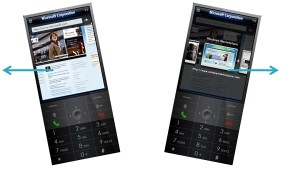 The OS will dynamically resize elements of the user interface, prioritizing them and making them easier to hit. Corners, like the close button, scrollbars, icons and the title bar/status bar, will all be able to grow to make things easier on the user.

Waking up the device

Gestures for scrolling (horizontal and vertical), task and menu access, press and hold controls, list items, press and drag, and launching shortcuts will also be available. The Windows Mobile 7 device will also be able to detect finger velocity, scrolling further if the user's finger moves faster.

When the user flicks to scroll within a list, a scroll handle will appear on the side. If the user touches it, the user can drag the scroll handle up and down for faster scrolling. This replaces the scroll bar. The more the handle is moved, the faster the screen will scroll. 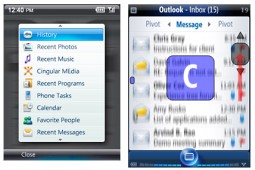 When using the keyboard, the letter enlarges and appears above your finger when you hit it, just like on the iPhone. When highlighting text, a zoom/edit box appears above it to show what you are highlighting. When in full page view in IE Mobile, if you hit an area with links it will zoom in with a bubble and help you choose from the links.

There will be various finger motion gestures, used for scrolling vertically and horizontally, task and menu access, pressing and holding on controls, list items, pressing and dragging, and launching shortcuts.

There will also be motion gestures, where the user moves the device to invoke certain commands. Microsoft Research has a technology concept that uses the device's camera as a motion sensor, enabling motion control while using the device. It will also support changing screen orientation when turning the device sideways, just like the iPhone does, but using the camera, not an accelerometer. These gestures will require the camera to be operating all the time a gesture may be used, which will affect battery life. And we couldn't help but scratch our heads how this will work in pitch dark environment.

There's also a part talking about allowing the user to "doodle" on the screen, letting users draw doodles on the device lock screen, as well as shake the screen to affect the wallpaper (like making water run, or blurring an image). The iPhone's lock screen is an iconic part of the device, and Microsoft wants to have a cool lock screen without copying Apple, so the plan is to give you fun things to do on the lock screen. 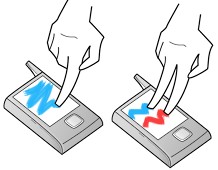 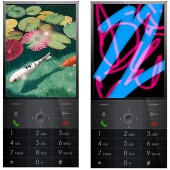 "Doodling" on the main unlock screen

There's a list of gestures that are being explored and may or may not make it into Mobile 7, including a gesture to dismiss an on-screen notification by shaking it off the screen, a gesture to automatically take you to a Smart Search notification panel, turning the phone like turning a key to unlock it, Pivoting by gesturing the phone sideways, moving through lists by shaking the phone up or down, switching the camera into black and white or other modes by shaking it down, adjusting camera aperture and shutter speed by rotating the camera, sending a file by "tossing" it to another device.

Pivoting through system tabs with shakes

Microsoft clearly has a lot planned to make Windows Mobile 7 the revolution it needs to be to compete with Apple, and Windows Mobile 7 is going to bring some cool and excitement to Microsoft's smart phones. Too bad we are going to have to wait for it at least a year more.

Full article found at Inside Microsoft

what if you're walking and using the phone at the same time? how sensitive must the shaking be to know the user actually wants to execute a command? Or if the camera can tell if the phone is being rotated or just shaking from the user walking/running...