The HTC 10 is the last of the major Android handsets for the first half of 2016 that's yet to be announced. The Android godparent took the One A9 design and upgraded the mid-rangy chipset with the new Snapdragon 820 and the results - seen here in an AnTuTu test - are stellar. 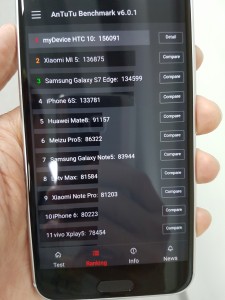 The phone is likely close to but not quite final and yet it already outscored the Samsung Galaxy S7/S7 edge. It's not clear in this chart if it's the Exynos 8890 or Snapdragon 820 S7, but we've tested both and neither of them can crack 150K points.

Check out the leaked color options for a better look at the upcoming flagship.

Who cares about this I want battery benchs and GFX :D