Smartphone cameras has come a long way since the early days. It's safe to say that photography in good light has been mastered and we've seen impressive advances in low-light shooting. The quality of 4K videos is still improving (while 1080p clips seem to have hit the ceiling of what's possible). HTC is hopeful selfies are the "next big thing" and that OIS would give them the edge. 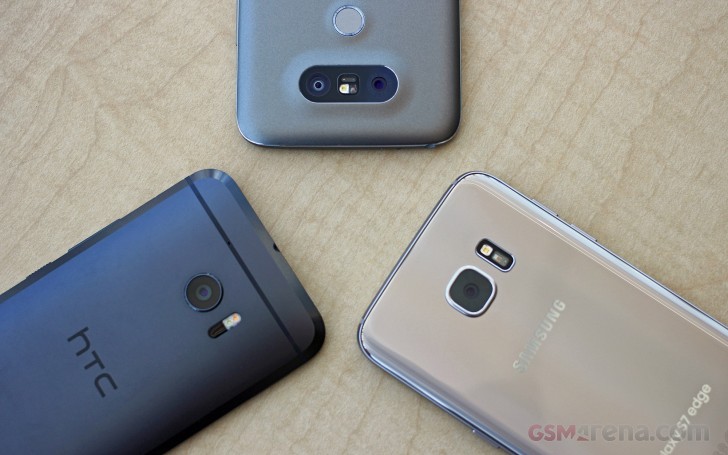 While selfies are indeed a popular genre on social networks, we've seen more dedicated efforts to capture that crowd - 16MP front-facing cameras and dedicated flash seem more worthwhile than a 5MP snapper with OIS. So this won't be the feature that saves the company.

To HTC's credit, the main camera is the best it has ever produced - better even than the HTC One camera was back in 2013. Photos, especially ones taken indoors, have an amazing level of detail that the other two couldn't match. For outdoor shots, it seems like the LG G5 or the Samsung Galaxy S7/S7 edge have the upper leg, but still the HTC produces high-quality photos.

We were quite disappointed with HTC 10's performance in the dark, though. ISO is boosted to untenable levels and the flash made things worse. The LG G5 did so much better with and without its lights on, Samsung's large pixels and bright aperture produced pleasing results as well.

As we mentioned earlier, HTC is comparatively new to the 4K video game (it did beat Apple by about six months). Quality has improved since the One M9 and is very good for a 2016 flagship, but videos were still not without issue. The FLAC audio option (while unique) doesn't have an impact for daily use, the camera was too eager to hunt for focus and in the end, the LG G5 and Samsung Galaxy S7 edge videos just looked better.

We also dug into things like HDR and panoramas, but again the HTC struggled to best its two opponents. The LG G5 seemed to have the edge over the S7 in dynamic range and panorama processing.

This test was largely motivated by the HTC 10 - we had already seen the LG G5 and Galaxy S7 go head to head before. The HTC flagship arrived late to the scene (launching almost a full quarter after the S7) and is currently more expensive than either of the Korean handsets. If it was unanimously best, we'd end this on a high note, with hope for the struggling company. However, the camera - while very good - will need help from the beautiful metal body and the clean Android install to move HTC 10 units off the shelves.