Gallery with connections to the cloud

The Pictures hub is the photo gallery of Windows Phone 7. When you start it, it shows the most recent photos (including those from the camera), What’s new (which shows photos from online services) and a menu, which lets you view all photos, photos sorted by date and your favorite photos.

Viewing an individual photo supports pinch zooming and you can easily upload the photo to Facebook or share it on some other service. There’s an option to automatically strip geo-tagging information before uploading it to online services – that way your offline album will still be geo-tagged, but you won’t have to worry about privacy.

The Pictures hub will automatically pull photos from your SkyDrive, Windows Live and Facebook accounts.

One of the HTC provided apps – Photo Enhancer – can be used to add a bit of flare to photos. It’s a really basic app, you just open a photo and select an effect: Auto enhance, Cinnamon, High contrast, Sepia, Overexposed, Glimmer, Twilight, Vintage, Antique and a few more.

The Photo Enhancer app from HTC

Sure, you can apply a few of these effects in the camera itself, but with Photo Enhancer you get to keep both the untarnished original and the modified photo.

Music and videos play to the Dolby and SRS tune

The video player doesn’t recognize .AVI files – in other words, don’t expect DivX or XviD support. However, the Zune software on your computer will automatically convert such files to .WMV (up to WVGA res) – so, you can watch those formats on the 7 Trophy, it’s just that the transfer to the device can take quite a while (depending on your computer configuration).

The HTC 7 Trophy also has a built in FM radio with a dead simple interface. You have the current frequency in very large digits – swiping left and right changes the frequency and a swipe and release automatically searches for the next available station in that direction.

Unfortunately the HTC 7 Trophy audio quality is quite a bit short of impressive. There are notable flaws even when you use the handset with an active external amplifier - imperfect frequency response and high intermodulation distortion. The rest of the scores are pretty good, but are still not enough to bring the 7 Trophy up there with its competitors.

And, as you could expect things get even worse when you plug in a pair of headphones. The stereo crosstalk increases (though it still remains pretty decent) and intermodulation distortion climbs even further. The 7 Trophy is also not among the loudest devices we have tested. 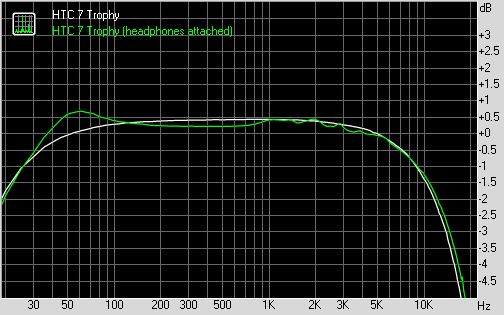