HTC Android phones could be banned from the US next year

Looks like HTC could be in some serious trouble here. The US International Trade Commission has found HTC guilty of infringing on Apple's patents and has banned the import and sales of their Android devices in the US. 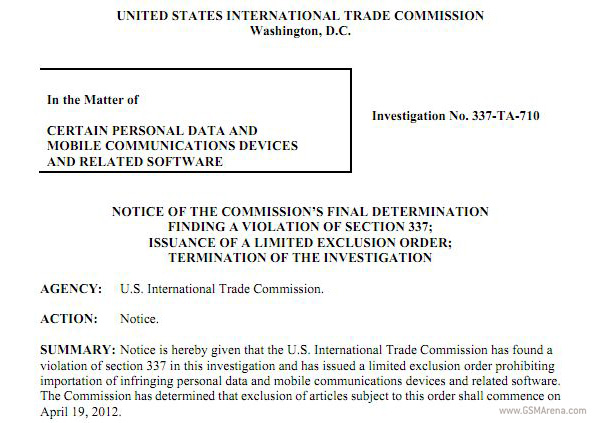 The patents in question are regarding a feature in iOS devices where the device goes through the text in messages and separates URLs, phone numbers and map locations and turns them into clickable links to be launched in their respective apps.

The thing is, even though HTC is using this feature in their phones, it is actually a part of the Android OS and has been there since Android 1.5 and not something that HTC added. But since Google does not sell Android, Apple cannot go after it and hence the next best thing is to sue the OEMs, in this case HTC.

This also means that Apple can now go after other Android OEMs who are likely to be using this feature in their devices running Android 1.5 to Android 2.2. But then, they can all do what HTC will now be doing, and that is simply removing the offending feature from their phones.

Yes, HTC has just issued a statement where they have confirmed that they will be removing the feature from their devices. This means that they will be allowed to import and sell their devices. However, this update needs to come from Google themselves and not something HTC can do on their own. Then there is also the thing about updating all those devices in time before April 19, 2012 and for that HTC will have to rely on support from the carries as well.

If HTC can pull this off they are in the clear. If not you will have a hard time getting your hands on certain HTC devices. As for other Android OEMs, they need to watch out for Apple too.

apple, like microsoft buys their way into everything, i bet that judge koh is being paid by apple

Apple has all the right to sue other mobile companies, since Apple invented mobile phones... Oh, wait, Apple didn't invent them?! Then they should be sued 'cause they make them and sell them...