HTC held a presentation in Taiwan today to show off its new range of low and mid-range phones. Dual-SIM is feature on two of the three new phones, which all belong to the Desire lineup.

The HTC Desire 700 is a more affordable alternative to the HTC One, with a bigger 5" screen but a lower resolution, qHD. Just like the One, it packs stereo BoomSound speakers on the front. It's powered by a quad-core Snapdragon chipset (the S400 with four Cortex-A7 cores most likely, details are sparse) and offers 1GB RAM. 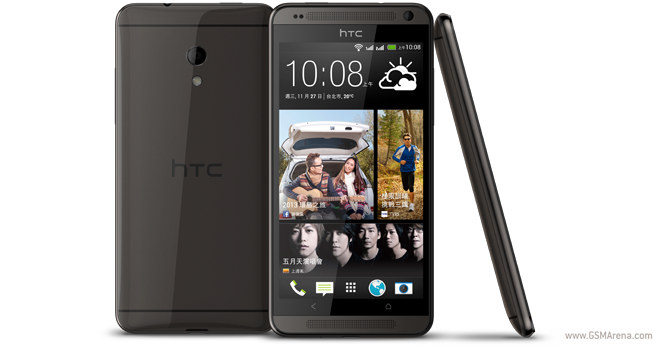 The Desire 700 has a traditional 8MP camera with a BSI sensor and an f/2.0 aperture, 2.1MP front-facing camera (again with BSI sensor). The main camera can record 1080p video and has HTC Zoe support. The built-in storage is 8GB and there's a microSD card.

The HTC Desire 700 is a dual-SIM phone with HSPA support on the first SIM slot and GSM/EDGE on the second SIM slot. Both slots are of the micro variety. The 2,100mAh Li-Po battery (rather small for a phone of this size) is good for nearly 12 hours of 3G calls.

The phone has the same 8MP/2.1MP camera combo as the 700 along with HTC ImageChip, but strangely no Zoe support. There's no stereo speakers on the front either.

Still, the Desire 501 is like the 700 in several other aspects, it has 1GB of RAM, 8GB of storage with a microSD expansion slot and a 2,100mAh battery. This gives the phone several weapons over the One mini (card slot, bigger battery) but the screen is no match for the 720p LCD on the mini, nor is the CPU up to par with the Krait-based chipset.

The 501 is not a dual-SIM phone, you can look to the very similar HTC Desire 500 for that.

The HTC Desire 601 is already official, but now it also got a dual-SIM version. The phone is a 4.5" version of the 701, with almost the exact same feature set except that the main camera has been demoted to a 5MP/1080p shooter and the internal storage has been halved to 4GB (the microSD card slot is still in place).

There's no indication of which (if any) of these phones will be available worldwide and when.

Main problem:Battery life is poor Not competitively priced (€300 at the time of writing) Budget-grade chipset Disappointing camera output in both stills and video 5" screen a tad thin on resolution No 3G support ...

Battery Life is so poor

battry is so poor. it just stay for 24 hour with out any speaking or using.