HTC announces the Desire 500 in Taiwan

HTC has announced a new mid-range Android smartphone in Taiwan called the Desire 500. The phone is priced at a suggested retail price of NT$11,900 and will be launched exclusively through Taiwan Mobile on August 1. 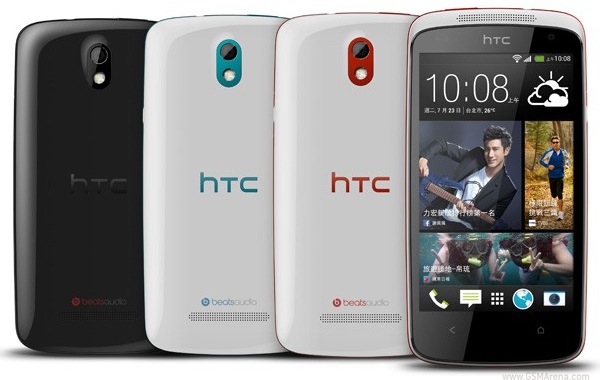 The Desire 500 looks somewhat similar to the One S from the front but trades in the metal body for plastic. It has a 4.3-inch, 800 x 480 resolution display, Qualcomm Snapdragon 200 SoC with a quad-core, 1.2GHz CPU and Adreno 205 GPU (likely the same 8625Q chip found in the Desire 600), 1GB of RAM, 4GB internal memory with microSD card slot, 8 megapixel BSI rear camera with 720p video recording, 1.6 megapixel BSI front camera, optional dual-SIM functionality, Android Jelly Bean with HTC Sense 5 and BlinkFeed UI and a 1,800mAh battery.

The Desire 500 carries the Beats Audio feature but lacks the Boom Sound speakers found on recent HTC phones. The phone will be available in three colors: Black, white with green accents and white with red accents.

Waiting for dis new baby of htc to come in market.nowadays htc is being the best smartphone maker company in world without doubt.i like htc devicea since Im using smartphones...love you htc keep on to produce your best...thanks

This phon is come on quade core presser..tjlhan is the best in the markit..and price is Indian 18000