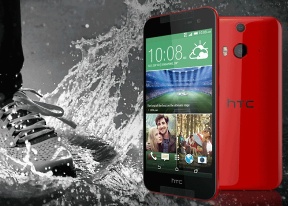 The Butterfly series may not be the bread winner for HTC but has proven to be among the most resourceful in the family. The HTC Butterfly 2 has a good foundation to build on: a solid screen, the trademark stereo speakers and HTC Sense 6.

HTC, who typically can't be bothered to care much about the midrange, have a four-headed monster at the top. The One (M8) is obviously in charge, with a fresh Windows Phone version in tow. The more affordable HTC One (E8) trades the metal outfit for polycarbonate but keeps most of the worthwhile specs, and even adds a more capable 13MP camera. The HTC Butterfly 2 is the last piece of the puzzle and the question is do they really need another piece of the same size.

The third installment in the Butterfly series adds dust and water resistance to what the One (E8) offers as well as a Duo camera setup with a 13MP primary sensor - a first for the company. And that might be just enough to emerge as HTC's most viable option against competing flagships like the Galaxy S5 and Sony's Xperia Z line.

The HTC Butterfly 2 is dust-protected and can go up to 1m deep underwater for 30 minutes and manages to do so with no protective flaps over the 3.5mm headphone jack or the microUSB 2.0 port. Here's goes the complete package.

The HTC Butterfly 2 ticks most of the boxes for an Android flagship in 2014 - the Snapdragon 801 is still more than relevant, the camera has a sufficient amount of pixels, the display is of ample size and 1080p resolution. The waterproofing has been steadily climbing from a gimmick to a sought-after feature. The only downgrade is the battery size - down from 3,200mAh in the Butterfly S. The current 2,700mAh is still slightly more than what the E8 has - and the battery life there was reasonably good.

Currently the HTC Butterfly 2 is mostly bound to markets outside Europe and US, so it's not standing in One M8's way. HTC has an impressive track record of gorgeous flagships, which however struggle to bring the much needed cash in. So who knows, the cheaper backups may be all they need to turn the trend around.

Even without the IP57 certification, the Butterfly 2 is a perfectly viable - and sufficiently fresh -alternative to the flagship. That said, being able to take the Butterfly 2 underwater for some cool snaps is nothing to frown at - and it's less of a hassle without the water-repellent flaps we so hate. So perhaps the Butterfly 2 has a good chance to impress. All it needs to do now is be as good as the HTC One (E8) and put on an acceptable price tag.

Or if you like music and have it playing to get up in the mornings.. Or with your friends. It's a huge feature for me. Especially when you output your music to a Boombox and it's louder then using an ipod. It's nice.