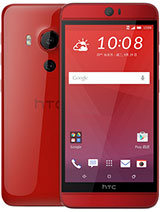 Anonymous, 16 Nov 2015butterfly battery was the best and I have had butter s and butterfly 2 and both of them have t... moreBut butterfly 3 has a screen of 2K resolution, which is much more power consuming than the previous generation.

one of the most perfect phones.butterfly3 has every thing that u need.good camera in back and front+high hardware and very good screen and monster amplifier speakers.also butterfly3 is equipped with water proof and dust resistance and .... I,m waiting for drop price then will go for it with head

GAJA, 11 Nov 2015HTC will never prosper unless they put high mAh batteries on flagships.. 2700mah for 5.2 inch ... morebutterfly battery was the best and I have had butter s and butterfly 2 and both of them have the best battery life

HTC will never prosper unless they put high mAh batteries on flagships.. 2700mah for 5.2 inch QHD, are you out of sense?

Htc butterfly is the best lineup from htc which can make profit for them, because they kinda messed up lately just like sony... And htc should really decrease their smartphone prices they were too expensive to be fail

Saw some reviews on Japanese sites about the phone;
It has an unusual problem of heat, and the battery lasts for 5 hours~, with about 2 and a half hours on SOT.
Absolutely disappointing, I had high hopes for this device, but what can you expect from a Quad HD screen, SD801 processor and a 5.2" large screen with 2700mah battery.
HTC should really rethink their releases.

the most underrated perfect smartphone

Was so close to acquire one of these phones. Had a bid on ebay for it and someone outbid me in the last 8 seconds. :(
Damn... This phone is so hard to find!

when it is releasing ?

Sherif, 17 Oct 2015Best Best with the best Design. Top of the world. waiting for the availability.... :) yeah , I can say its a great design but the camera in the middle of the top of the fone stink baby, I know its HTC's design but it stink

Total of 194 user reviews and opinions for HTC Butterfly 3.
ADVERTISEMENTS