HTC ChaCha may see a launch June, according to HTC Germany

HTC ChaCha and the HTC Salsa are part of the duo Facebook phones announced at the MWC 2011 this year. Both devices were scheduled for Q2 2011 but now we have a more specific date thanks to party invite from one of HTC Facebook pages. 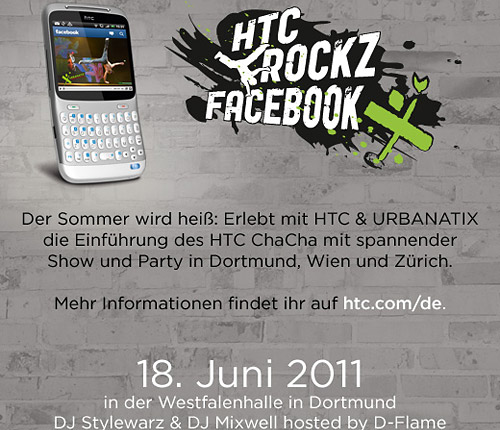 HTC Germany has thrown a poster announcing a couple of Facebook oriented parties in Germany, Austria and Switzerland starting on 18 June in Dortmund. Remind you of something? Yes, the HTC Sensation got a similar party for its announcement in London a couple of weeks ago.

However, more often than not HTC launch their phones first in the UK, so we’ll see if those events in Germany, Austria and Switzerland won’t be just after-parties of an even sooner event planned for the UK. Only time will tell. We'll keep you updated.