64-bit smartphones are already a reality with the iPhone 5s while several manufacturers are competing to be the first to bring a 64-bit Android to market. HTC might claim that title with the mid-range Desire 820.

The phone has been officially confirmed via the HTC Weibo account though details are very scarce – all the teaser images really say is "64-bit" and "September 4". The first image lists off the HTC firsts – first Android phone, first 1080p phone, first f/2.0 camera aperture and so on.

The second image is more interesting and shows what appears to be the front-facing camera, off to the side of a front-facing speaker grill. Our Chinese is spotty but that big "64" is hard to misinterpret. 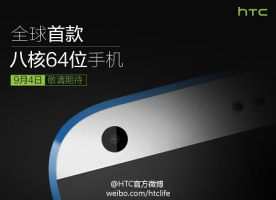 The short text accompanying the second teaser image claims this is the "world's first octa-core 64-bit phone". If it's a Qualcomm chipset then it must be the Snapdragon 615 – it has eight Cortex-A53 cores (the 64-bit replacement of the Cortex-A7) and a next-gen Adreno 405 GPU.

A previous rumor of the HTC A11 claimed a Snapdragon 410 chipset (quad Cortex-A53 with Adreno 306) but that may be a different mid-range Desire phone.

September 4 of course means HTC's IFA event where the company will make a bit for another "world's first" title.

The Snapdragon 615 chipset isn't that great. It's actually using a low end core design. Think of the 615 as something comparable to Apple's A7 chips used on the iPhone 5S. The Snapdragon 808/810 is supposed to compare to the Apple A8, but they are...

Hi I have one Question to ask it had 64-bit Snapdragon 615 chipset. Is this supports all app and how its works and may 64 bit will gets Ram slow..? clarify me plese

people are so used to addition they should know that a 64bit 615 chip is like a 32bit 1230 chip. but i think there's something else coming with this phone. We'll just have to wait and see come September 4.