HTC's Turkish branch just confirmed through their Facebook page that 7 of the company's smartphones will receive an Ice Cream Sandwich update this month, but promptly removed the notice soon after.

The devices in question are the Sensation, Sensation XE, Sensation XL, Amaze 4G, Rezound, EVO Design 4G and Vivid. There's also a word on the HTC Thunderbolt, which should receive the ICS update by the end of Q1 of 2012. 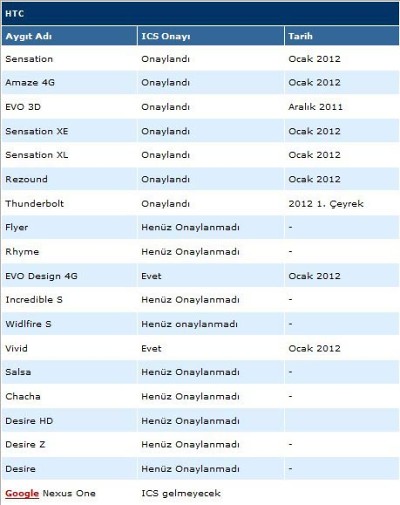 It's still uncertain which of the unconfirmed HTC droids will get the ICS treatment, but things are obviously developing quickly so we should know pretty soon.

Update: It turns out that the update schedule wasn't created by HTC, but by a fan of the company and the Taiwanese denied that the schedule it describes is real. HTC did promise to end the speculations by announcing the official update schedule soon, though.

Nexus....really? So you have ics installed on an inferior phone

But the phone itself isn't that great. Everything about Nexus is inferior to Rezound, except the screen. GPU, CPU, and memory (rezound can get higher memory by getting sd card with higher memory).