Like most of the multimedia department, the music player is basically the same as what we saw on the Legend.

The new player interface is nice, with no new features inside though

We were disappointed to find no contextual search in the music player for songs and related stuff on YouTube or Google. The other music player weaknesses of the Android platform still need addressing too - no equalizer presets, nor any alternative visualizations.

The HTC Desire is also equipped with an FM radio, which has a pretty simple interface. It automatically scans the area for the available stations and allows you to mark some of them as favorite for easier scrolling between them. It also supports RDS and allows playback through the loudspeaker.

The HTC Desire pulls off the same remarkable audio quality as the Sony Ericsson XPERIA X10, but is louder in terms of earphones volume.

In fact the two frequency response graphs are so similar that we suspect a similar (or maybe identical) hardware has been used inside the two Android flagships. We suspect that HTC have found a way to pump up the volume a bit higher, which has naturally led to the minimal differences you see in the table below.

At any rate the Desire readings are excellent all over, the HTC handset pulling one of the best all-round performances that we have ever seen. Check it out for yourselves. 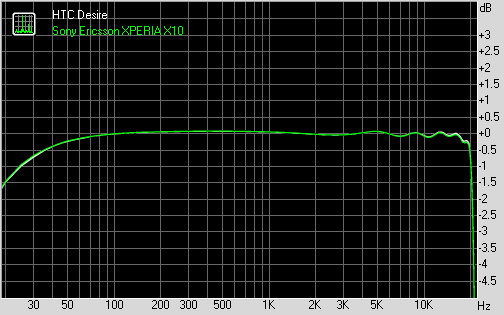