HTC Desire has a 5 megapixel sensor for a maximum image resolution of 2592 x 1936 pixels, and a LED flash. This is becoming pretty much the norm for recent upper mid-range and high-end Android handsets so the HTC seems to be on level ground with its competitors.

However thanks to Android 2.1, the Desire boasts a camera interface that is quite competitive outside the Google OS world too. There are a number of customizable settings ranging from ISO speed to aspect ratio and auto focus. Now, that makes perhaps the Omnia HD owners sneer but it’s a nice improvement for Android.

We are yet to see modern-day features such as face and smile detection, for example, but the gap is closing.

You get shortcuts for setting the flash and exposure compensation right in the viewfinder but that’s pretty much that. The only other shortcut leads to the gallery and that hardly helps much the photography itself. Touch focus is enabled – and you can even go ahead and capture a shot. The other option is the trackpad – it serves as a shutter key. The bad thing is it doesn’t have dual action for autofocus and capture. You just press and the handset takes care of locking focus and taking the shot.

The touch focus gives you a bit more flexibility – a tap will lock focus, but you can skip the shot. A tap and hold will lock focus on the part of the frame where you want it, and the shot will be captured as you lift your thumb. Anyway, using the whole touchscreen to capture isn’t the most comfortable thing. In the end, nothing beats a proper shutter key.

At first we thought the Desire was a rather poor shooter, but we received a second unit straight from a retail store and it was much better than the one we got from HTC as a test sample. We've edited the article accordingly and all camera samples have been replaced with the better ones. Unfortunately, video quality and framerate is still quite disappointing.

Generally, image quality of the HTC Desire camera is nice and definitely better than the Legend,which we sourced from a retail source as well.

But back to the HTC Desire camera, as we look at the new samples there's a decent amount of resolved detail and the contrast is now much better. Noise levels however have remained relatively high (though tolerable) and you can easily see a pinkish spot in the center of the frame (like the one on HTC HD2).

We also snapped our resolution chart with the Desire. You can check out what that test is all about here. As we mentioned, you can easily see a pinkish spot in the center of the frame when you shoot lightly-colored subjects. 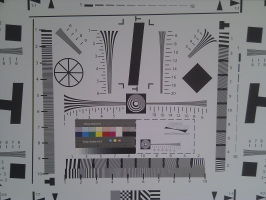 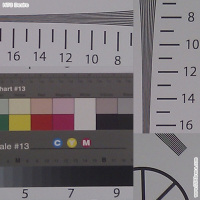 WVGA video at only 15 fps

HTC Desire manages WVGA videos at 15 fps. The resolution is excellent for an Android handset, but the frame rate is rather disappointing. There is no word in the official specs sheet on the fps so we are unable to confirm if the 15 frames meet the specs or not.

The interface of the camcorder is similar to the one of the still camera and by usual Android standards there are tons of customizable options with this one. You can set the video resolution, encoding type and recording limit.

As far as image adjustments are concerned, you get exposure compensation, contrast, saturation and sharpness settings as well as color effects and white balances settings.

Auto focus is also there for you to enable but the Desire only focuses before the recording starts and acts as a fixed focus camera after that.

Video quality is below average at the optimum settings. The amount of resolved detail is not enough, the colors are washed-out, the low contrast issues are visible here too and there are some compression artifacts but this is nothing to frown at too much.

The situation with lower resolution settings remains the same – both frame rate and video quality.

There are rumors about DivX 720p video recording coming up within the next firmware update along with the native DivX support itself. It would be really nice if this comes out to be true, since the Desire was expected to sport 720p video encoding on its announcement. But if HTC keeps the current fps and quality achievement, this update will be worthless.