We already know that HTC is working on a couple of Desire smartphones (the Desire 10 Lifestyle and Desire 10 Pro), and we've also seen leaked renders of the devices. Now, the former has spotted on benchmarking website AnTuTu, revealing some of its key specs. 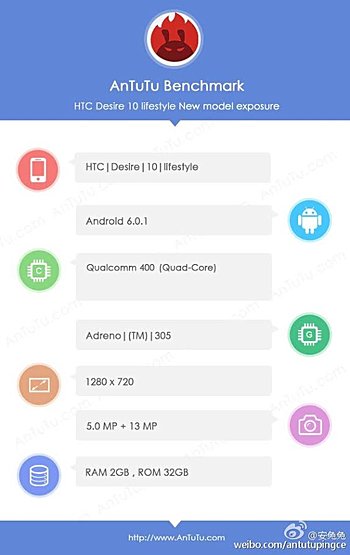 The listing reveals that the device is powered by a Snapdragon 400 SoC, and sports a 1280 x 720 pixel display. RAM is 2GB, while internal memory is 32GB. In terms of camera, the device features a 13MP rear unit and a 5MP front shooter. It runs Android 6.0.1 Marshmallow out of the box.

Makes me feel they bought too many snapdragon 400 for their smartwatch and then later scraped the project. And thus... Desire 825,630,10l etc. Lets hope htc finishes stockes soon and start manufacturing great phones again.

A friend of mine has an HTC 10 which i believe has Sense Ui 8 right? yes it's nice and with good features but CM has better support and still faster.

and uh i forgot u never tried sense 8.0.indeed you would change your mind.