It seems HTC will shortly be updating its portfolio with yet another Android device, as can be seen from the pictures below. What we have here is the HTC Desire 200 and by the looks of it it will be a budget device. 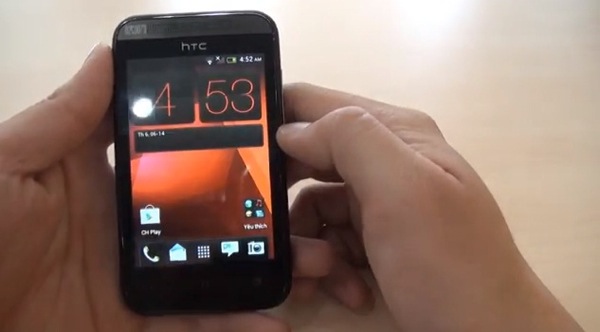 The HTC Desire 200 looks quite familiar. On the front, it has the earpiece section that is inspired from the HTC One and the controls below look like any other recent HTC Android device. On the back, it looks almost identical to some of the previous HTC phones, such as the Desire C.

Inside, there is a 3.5-inch, 320 x 480 resolution LCD, 1GHz processor, 512MB of RAM, 4GB storage space with microSD card slot and a 1,400mAh battery. The device seen above was found running on Android 4.0.3 Ice Cream Sandwich but it's unlikely that the final device would be running on anything older than Android 4.1.

No word on pricing and launch date so far.

Nokia copied htc s home screen to their symbian belle phones but failed to get anywhere near the sense UI.

this phone is the same as desire c only with a higher clocked proc (at least for now) so if this phone gets andro 5.0 ,desire c should get it too . Last time i checked HTC said JB requires more than 512...

you can compare u r lumia wp8 to symbian and ashas. dont compare it to mighty androids.