HTC announced that its CES presence will be focused on the Desire line and the first product is already out of the gate – meet the HTC Desire 320, the Desire 310's younger twin. The 310 was announced almost exactly a year ago and now the 320 comes with essentially the same specs. 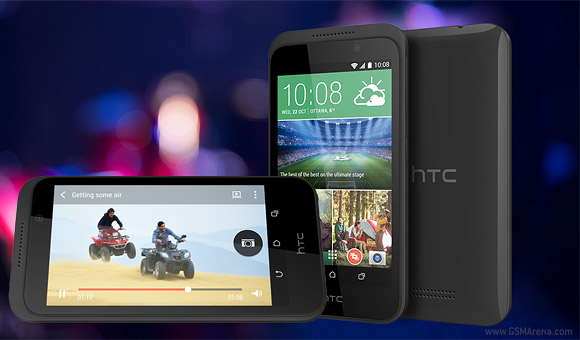 The phone is basically the same size and keeps the 4.5" FWVGA screen (that's 480 x 854px). It's powered by a quad-core 1.3GHz processor again (no info whether it's a Cortex-A7 or not). It will come with 512MB RAM or 1GB depending on the region, the internal storage is similarly 4GB or 8GB.

At least the Desire 320 will launch with Android 4.4 KitKat. Regardless of which storage version you get, you'll want to insert a microSD card. The 4GB version leaves barely you 1.5GB left over.

The rest is pretty similar though, a 5MP camera with 1080p video capture (impressive for an entry-level device). On the front is the same VGA camera as before.

For connectivity there's quad-band 2G and 3G with HSPA going up to 21Mbps. The phone uses microSIM cards. Anyway, there's Wi-Fi b/g/n, Bluetooth 4.0 and GPS as can be expected. The 2,100mAh Li-Po battery is good for 12 hours of talking on a 3G network and 690 hours on standby.

The HTC Desire 320 will be released in the UK, presumably other regions too. It's already on sale in Canada - $99 pre-paid, $70 on Telus.

Not bad for such specs for the quoted price given HTC is an established and reputed brand.

Um... What. This device is not new? It's been out in Canada for months. It costs $100 or less here. It's very cheap, and a very good phone for the price (the only thing it falls slightly short on is the display, and internal memory - which is on...