Desire has long been the signature of the company's tier-2 lineup. With past offerings varying from capable midrangers all the way down to entry level, going for a smartphone bearing the Desire moniker has largely been a hit-or-miss affair.

The Desire 500 is HTC's latest attempt to ride the middle road between features and price, and it is the modern day equivalent of the HTC Desire X released late last year. The other way to look at it is as the more affordable alternative of the Desire 600 dual SIM, which we reviewed a while ago. That said, the one we're dealing with is the single-SIM flavor of the HTC Desire 500, but there is a dial SIM variant, too. 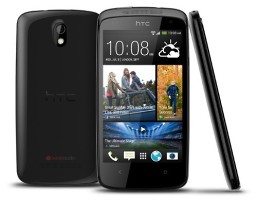 Although you won't find some of the latest bells and whistles on the Desire 500 - like an IR-port or a 1080p display - what you will get is solid quad-core performance alongside the company's latest Sense UI 5.0. Here's a quick rundown of the device's key strengths and most notable weaknesses:

The Desire 500 may not be a sports car, but the quad-core 1.2GHz processor would mean it should be a nice cruiser - and most people are after that in a midranger. The display resolution is not up there with the best on the positive side, the graphical sub-system doesn't have to draw as many pixels on the screen so this may even help with performance. Also impressive on paper are the camera capabilities, which despite not being able to handle 1080p, include 720p and slow-motion videos. As an added bonus the front-facing camera shoots in 720p as well.

Well, we are never satisfied with judging phones by their specs sheets only so we'll get right into testing whether the Desire 500 is worth its salt. Up next we have a through look at the hardware and build quality.

Ive had my HTC Desire since 2015. Has always worked great, both in heat. cold and it has survived being drowned in water. But the poor internal memory of 4 gb makes it har to have apps. You really need to carefully choose which ones you want since yo...

I bought it from The Android Shop, Koramangala, Bangalore in September 2013. EMIE 3576540511522970. From beginning I faced the problem " Sim card not detected". Restart the phone and it detects the SD card and this goes on. Android shop, w...

Thts right,this mob Is great but heats up after 15 mints