The HTC One leads the charge of the Sense 5 experience and now the HTC Desire 600 dual sim fills the ranks with an affordable alternative. The smartphone was introduced today and is supposed to bring many of the One's premium features at a far lower price point.

The HTC Desire 600 dual sim runs Android Jelly Bean (probably 4.1) with Sense 5 on top, which includes the BlinkFeed screen that pulls updates and info from your social networking accounts and 1,400 media sources.

It's powered by a Snapdragon 200 chipset, which packs four Cortex-A5 CPUs clocked at 1.2GHz, 1GB RAM and Adreno 203 GPU. There's 8GB of non-expandable built-in storage and a 1,860mAh battery. 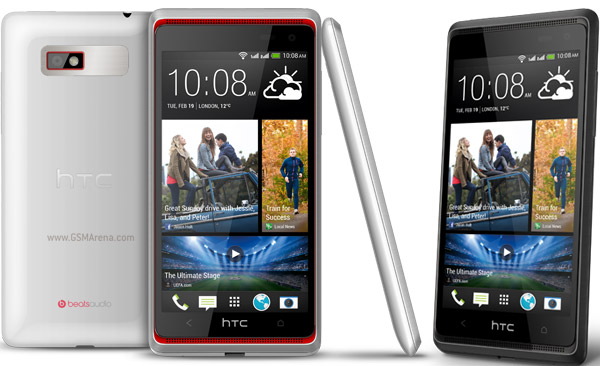 The smartphone has a 4.5" Super LCD2 screen with qHD resolution, surrounded by two BoomSound speakers, just like on the One. Beats Audio is, of course, also a part of the package.

The HTC Desire 600 dual sim packs an 8MP / 720p main camera and a 1.6MP front-facing camera that can be used to capture photos, which the Video Highlights feature combines into 30 second video clips. All you have to do is pick the music theme. It's not as great as Zoe, but it's in the same spirit.

As the name suggests, the phone has two SIM card slots and both cards are active at the same time – you can receive a call on one of them, even if the other is already in use. The phone has 3G with HSDPA connectivity (up to 7.2Mbps down), Bluetooth 4.0 with aptX, Wi-Fi b/g/n, NFC and GPS (plus GLONASS in Russia and the EU).

The HTC Desire 600 will be available early next month and while it aims for global availability, it will start off with Russia, Ukraine and the Middle East. There's no info on pricing yet.

Vry lowest feuter No 4G NO compass video recording 720p vry low and much more i think max price is 18000.

Yeaahh.. thanks for sharing.

does this come with an FM radio? i listen to the radio a lot, so that's a notable particular for me.