HTC recently announced its dual-SIM Desire 600, a smartphone that is said to bring many of the premium features from the company's flagship smartphone, the HTC One. HTC did not reveal the pricing of the smartphone during its announcement, but now, the device is up for pre-order from the official HTC online store in Russia. 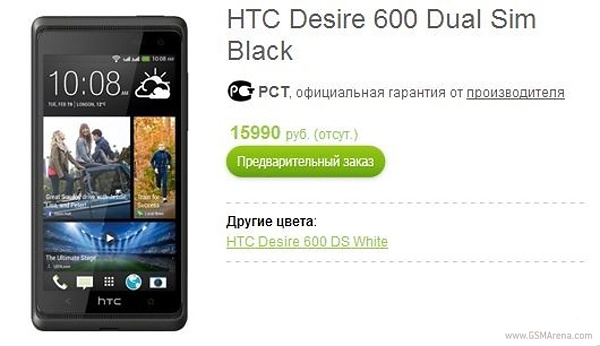 To recap some of the specifications of the HTC Desire 600, it comes with a 4.5-inch Super LCD2 display with a qHD resolution, 1.2 GHz processor along with 1 GB of RAM, Adreno 203 GPU, 8 GB inbuilt memory, 8 megapixel rear camera, 1.6 megapixel front camera, Android 4.1 Jelly Bean and a 1,860mAh battery.

Thanks Denis, for sending this in!

when it release in india please tell date and price