After a number of leaks, the HTC Desire C (previously known as Golf and Wildfire C) went official today. It bears some resemblance to the HTC Explorer, but it's actually more of a One series smartphone. 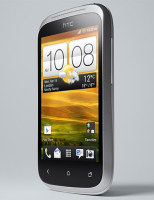 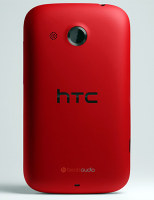 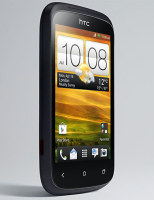 HTC Desire C is an ICS phone on a budget

The Desire C runs Android 4.0 Ice Cream Sandwich with Sense 4.0 on top out of the box. It also features Beats Audio technology (no headphones though) and packs a 3.5" LCD of HVGA resolution (the Explorer had a 3.2" screen). The handset is 12mm thick and boasts a durable metal frame.

The phone is powered by a Qualcomm Snapdragon S1 chipset with a CPU clocked at 600MHz. The actual chipset model number wasn't announced, but it's probably the MSM7225A with a Cortex-A5 CPU and 512MB RAM (the one that powers the Explorer).

The HTC Desire C brings some more upgrades compared to its predecessors. The camera is a 5MP unit with F/2.8 aperture and 34mm focal length (in 35mm equivalent). You also get 4GB of built-in storage (plus 25GB cloud space from Dropbox for 2 years), a microSD card slot, 3G with 7.2Mbps HSDPA, Bluetooth 4.0, Wi-Fi and USB 2.0. The battery has 1230mAh capacity and it's user-accessible. There will also be an NFC-enabled version of the Desire C.

The HTC Desire C will be available in Polar White, Stealth Black and Flamenco Red in select European countries (we've seen Romania for €200, the Netherlands for €220 and Portugal who jumped the gun a couple of days ago) later this month.

Update: T-Mobile UK will offer the Desire C starting early next month. You can get it for £170 without a contract or free if you sign a two-year contract (£15.50 a month).

its great to have this phone in my hand . its handy and awesome

So do u also want android to become an OS only for high end devices with premium rates like the iOS on iphone? Android caters to everything from budget to premium priced devices and while desire c may not be as fast as it's dual n quad core cousins ...