Portrait photography used to be something people dress up for, now teens snap a few "selfies" before breakfast. HTC goes all-in on the selfie craze with the new HTC Desire Eye where front and back cameras pack equally impressive 13MP sensors. They also have a dual-LED flash each, so now photos of you get the same treatment as photos of other people. 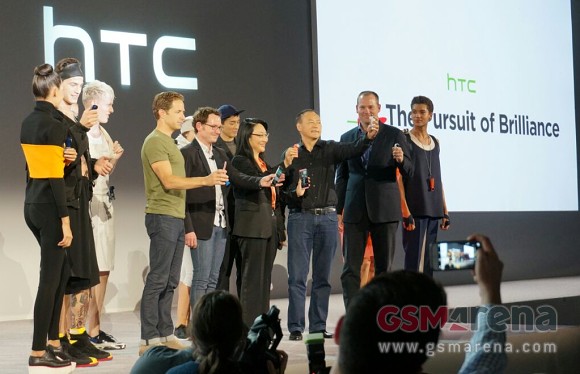 HTC is continuing to experiment with camera setups - the Duo Camera of the HTC One (M8) was unique and the Desire Eye setup is even more remarkable. The front-facing camera appears massive, a cyclopic eye right above the screen. It's a 13MP unit with its own pair of two-color LEDs, making it probably the most impressive selfie camera we've seen.

HTC says it's more than just selfies - plenty of 18-26-year-olds spend a lot of time video chatting, not counting professionals who can use the potent front cam for video conferencing. There's a good deal of proprietary software to back up that claim and the same imagination that spawned Zoe is here with a new twist on dual-camera photos (dual as in front and rear, not two at the back).

HTC Desire Eye at a glance:

Beyond that the HTC Desire Eye is the new flagship of the Desire family line. With its plastic exterior it can't rub shoulders with the One elite, but the Eye has a bigger screen (5.2") than the One (M8) and the same Snapdragon 801 chipset.

It's water resistant too - IPX7 for submersion up to 1 meter for half an hour - and HTC pulled it off without any flaps. The Desire Eye keeps the BoomSound stereo speakers, the LTE connectivity, the microSD card slot, the Sense-enhanced KitKat, basically all the best features of the latest One flagship aside from the metal unibody.

HTC Desire Eye in our hands

We've not heard anything on pricing yet but HTC is well aware of how market segments and pricing work and we'll be very surprised if a Desire gets priced higher than the One. Time to market was another talking point so the launch date should be close.

The Desire Eye wasn't the only camera on stage in New York, HTC is entering the action camera segment. The RE camera has a unique periscope shape and a simple interface. Gyro and grip sensors work together to automatically turn the camera on as soon as you grab it and off when you put it down. There are a total of two buttons on the camera and you can use an Android app to control it remotely.

The RE camera itself shoots 16MP stills and 1080p videos. While HTC isn't going after the GoPro with video resolution, the company bets on digital stabilization and IPX7 water resistance with no cases (it goes up to IPX8 with a special waterproof cap).

HTC stands for High Tech Computers, but I like the way you think, as they can use Here To Change to advertise their products.