The RE is HTC's foray into the action camera field. The company went for a unique design that you sort of hold and point like a gun when shooting handheld. The camera can be propped up on a level surface but at the bottom there's a standard tripod mount that can be used with a wide array of accessories.

Such wide lenses naturally create a fisheye effect, but you can set the camera to automatically correct it. Of course you can choose to keep the fish eye look (which captures a bit more of the scene). You can also go for the crop mode (which reduces the field of view but produces geometrically correct result by default.

The HTC RE camera records 1080p@30fps videos or 720p 4x slow-motion videos (that's 120fps). Slow-motion mode is triggered with the button in the front, the one below the camera. Audio is captured via the single microphone on top of the camera. We're no fans of mono sound, but at least HTC used a high 170Kbps bitrate and 48kHz sampling rate.

Three of the four available HTC RE colors

The camera has no interface really, you just grab the camera and it activates (thanks to the grip and gyro sensors). Then you press the mirror key on the back - short press for photo, long press for video. A small, hard to see LED blinks when you press the shutter key and the speaker produces a sound to assure you that you're recording.

A wide number of accessories and mounts will be available for the HTC Re camera at launch. See them below alongside the retail package of the gadget.

The RE can connect to Android (v4.3+) or iOS (v7+) smartphones for remote viewfinder and controls. The iOS app will only be available next year, though.

Adjusting RE camera settings from the app

Besides the usual shooting modes, the app also enables time lapse photography. Photos can be viewed on the phone and while connected the RE camera, the app can share photos and videos on your favorite social network and automatically back up the files on a cloud account for safe keeping.

Browsing photos and videos from the phone • recording a video

Another way to get at your images is through the microUSB port on the bottom. Photos and videos are stored on a microSD card hidden in the slot at the bottom. There's an 8GB card out of the box but you can use up to 128GB cards.

The microUSB port and microSD card slot have been sealed well enough to earn an IPX7 rating - water resistance up to 1m for half an hour. Keep in mind that this is for fresh water and chemicals (even soap can damage the microUSB port). There's protective lens cap and a screw on cap for the bottom that covers the port and card slot and bumps the water resistance to IPX8 (up to 3 meters of water for two hours).

In the box you get a wrist lanyard that also screws in the tripod mount. Additional accessories include various mounts (suction cups, bike mounts, etc.), an extended battery pack (prolongs capture times by 4 times) and a charging stand. The stand keeps the RE camera upright, making it suitable for time-lapse videos. 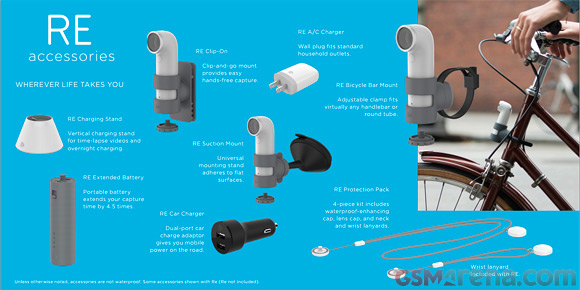 By itself the camera's 820mAh battery is rated at 1,200 photos or 1 hour and 40 minutes of straight video shooting. There's an LED on the front that shows the battery status - when you pick up the camera it will glow green if the battery has 25% or more charge, orange if less.

Here are a few sample shots we took with the HTC RE camera.

We had a brand new GoPro Hero4 Black, the top of the line model announced just a week ago. We took a quick shot with each - unfortunately we didn't have time for more and the weather wasn't great but here's a first head to head shot. The GoPro is noticeably wider (170° in ultra wide angle mode) but you can easily see the distortion in close by objects.

The RE uses a digital stabilization (only available in the crop mode) that works quite well. We quite like how it works compared to a GoPro camera (which lacks any stabilization options). HTC still has work to do on the RE camera so we'll leave video comparisons for when it is ready.

Until then, here's a video sample shot with the RE camera for you to enjoy.

We also set up for a quick time lapse, though strangely it came out at 720p resolution.