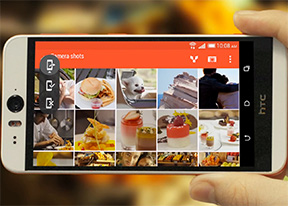 HTC Desire Eye is the most capable smartphone the Taiwanese manufacturer has to offer. Only its Desire moniker, the plastic body, and the smaller marketing budget prevent the newcomer from taking the HTC One (M8) spot as the company's Android flagship smartphone in the second half of 2014.

We believe that many will find the capable duo of 13MP cameras and the IPX7 rating that HTC Desire Eye has to offer are well worth it over the metal body of the M8. The argument is especially valid for those who are into selfies. 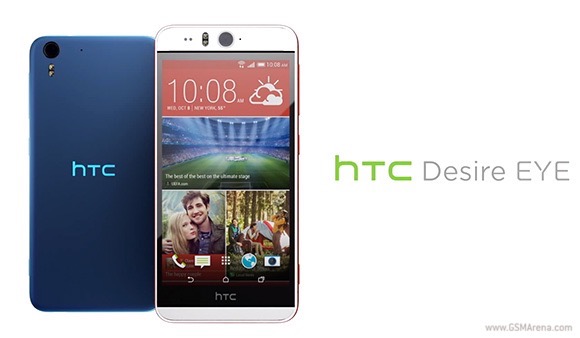 The Taiwanese manufacturer has opted for a curious product strategy for the second half of 2014. Rather than launch another flagship device like it did in past years, HTC released a characterful mid-ranger with top-end specs and rather unique feature set. Such a combination should keep the manufacturer under the spotlight without stealing too much attention from the metal-clad M8 halo range.

Both the front and the back camera of the HTC Desire Eye delivered stellar performance, which harks back to the days when the company was among the leaders in image quality. The Eye Experience suite by HTC on the other hand ensures that the capable imaging hardware is utilized well.

Qualcomm Snapdragon 801 is not the latest and greatest the chipmaker has to offer, but it never left us wanting for more oomph. The chipset is powerful for every task out there and will surely remain relevant over a typical device usage cycle.

The 5.2" 1080p display is a quality unit as expected from HTC. The BoomSound stereo speakers complement it perfectly and make the Desire Eye a great platform for gobbling up multimedia content.

The plastic body of the handset surely doesn't look as premium as the metal attire of the HTC One (M8), but is solidly put together and, thanks to the IPX7 rating, easier to live with on a daily basis. The side power/lock key results in improved handling too.

We also wish that the device's stereo speakers were as loud as those found in the HTC One (M8). However, the presence of IPX7 certification surely makes up for the lack of decibels.

UHD video recording would have been a welcome addition as well, especially since we know that the hardware is up to the task. Hopefully HTC will resolve the lack of it with a future update.

HTC Desire Eye is priced at $149.99 with two-year commitment to AT&T or $549.99 outright. As expected, both prices sit below those of the HTC One (M8). As always, we took a look to see what else you can pick up for the money.

HTC One (M8), One (E8), and Butterfly 2 are the Desire Eye alternatives from the manufacturer's own stable. Each will offer similar hardware performance and price tag, with the exception of the E8, which is cheaper.

The Butterfly 2 comes closest to the Eye spec for spec. None of the three devices however is even remotely as capable as the Desire Eye when it comes to selfies.

LG G3 offers bona fide flagship hardware for the same money as the Desire Eye, headed by a gorgeous 5.5" QHD display. However, the Korean entry is not waterproof and it can't capture selfies like its rival, or play tunes on stereo speakers.

Sony Xperia Z2 is another formidable rival standing in the way of HTC Desire Eye. It trumps the newcomer on all instances, except selfie capabilities.

Despite the flagship competitors in its way, HTC Desire Eye surely has its charms. The front-facing camera that gives the handset its name is undoubtedly its key selling point - if you like selfies, this surely is the phone for you. Thankfully, we can promise you that even in this case, the front-facing camera will not be the only thing you will like about the smartphone.