Last time we heard about the HTC Desire Gingerbread update story we found out that HTC was planning on releasing the update by the end of July. We expected some sort of announcement when the update finally starts rolling out but it seems HTC is keen on doing this silently. 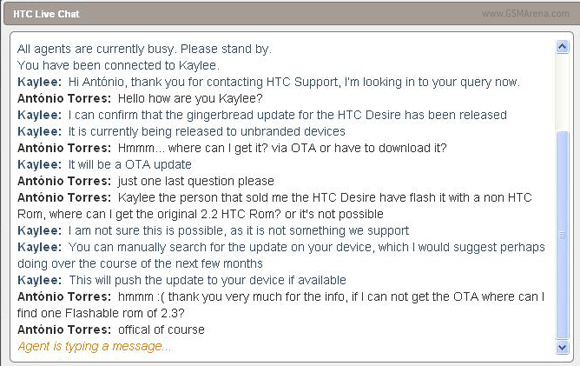 An XDA forum member discovered through a chat with the HTC Support team that the update has already started rolling out. The update for now is restricted to unbranded devices and even if you have an unbranded device the update may not be available to you right now depending on your location.

So go check your HTC Desire to see if the update is available and if not, have a little patience. At least you are getting the update, unlike certain other devices.

Update: We have learned from HTC's Facebook page that the Gingerbread update for the Desire is not being rolled out through over-the-air updates but only through HTC's developer website. The reason for this is that HTC had to make a lot of compromises to make the update available for the Desire and thus it can end up doing more harm than good if a novice user installs it on their phone, especially considering the fact that the update wipes all data from your phone and removes a lot of the system applications, including the entire Sense UI. Some other things such as the wallpapers have also been removed but these can be installed later on through HTC's website. HTC is making abundantly clear that you should only go about installing this update if you know what you are doing. And one more thing, the update is not available to users in Germany (Telekom Deutschland), North America, South Korea and Japan.

Pls how do i fine MAC address on my HTC Desire816, can someone help me...