The highly popular QWERTY-fied HTC Desire Z and the 8MP fixed-focus Nokia C7 cameraphone have just arrived at the Vodafone stores across the UK. Both can be had for free, of course, only after signing a contract with the carrier. 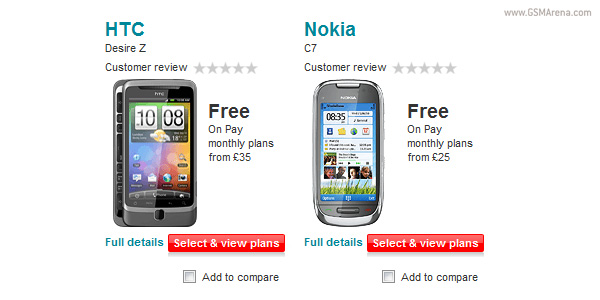 The HTC Desire Z is among the still few droids out there to serve Froyo. But what helps it to really stand out from the crowd of Android-driven devices is its QWERTY keyboard. By the way, the messenger is named after the unusual Z hinge of the side-slide keyboard.

The Desire Z, which we reviewed a short while back, is also equipped with a nice (though not AMOLED-nice) 3.7” S-LCD capacitive touchscreen, a good enough 800MHz processor, 512MB RAM and a 5 megapixel autofocus camera capable of shooting 720p HD videos.

If you go for a 25GBP/month 2-year contract with Vodafone UK, you get the HTC Desire Z for 199GBP. And if you can afford to pay 10GBP more a month and sign a 35GBP/month 2-year subscription, Vodafone gives you the smartphone for free.

If that sounds a bit too much to you, you could check out the Nokia C7, which has just made it to Vodafone UK and is more affordable – it comes for free with a new 25GBP/month 2-year agreement or for 99GBP with a 20GBP/month 2-year contract.

The C7 runs the still fresh Symbian^3 and is among the first Nokia handsets featuring an AMOLED capacitive touchscreen (a good one by the way). It packs diverse connectivity options and its fixed-focus snapper can take 8MP stills and 720p HD videos.

And that's why everything used by Apple is produced by someone else... ¬¬'

And that's why everyone is copying the iphone and whatever comes out of Apple. Nice try :)