HTC DROID DNA back on Verizon's website without a word

Verizon seems to have changed its mind about the DROID DNA. A couple of days ago it was taken off the carrier’s site with sales reps saying it’s been retired in favor of an upcoming project (presumably the HTC One). And now it’s back.

And not just back on the site, there are available units. According to GottaBeMobile, the SKU has changed pointing to a slightly different unit (though the specs sheet seems unchanged). So, was this just a resupply issue that got resolved quickly? Perhaps, but Verizon isn’t saying anything. 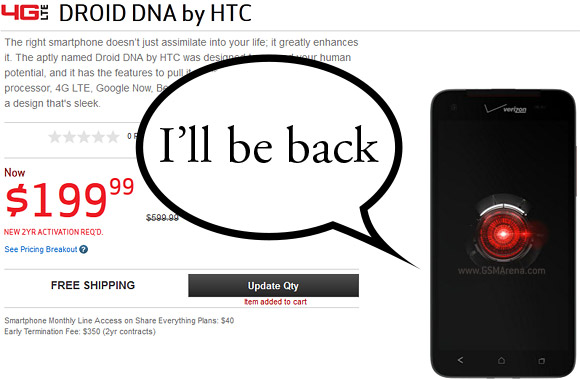 What does it mean for the HTC One? Probably nothing as it doesn’t share hardware components with the DROID DNA. It’s just that the One is hard to make.

In the mean time, you can grab the bigger, slightly older sibling of the One for $199 from Verizon’s site (note that it’s cheaper in other places, $50 at Amazon Wireless, for example).

good news. DROID DNA is a best smartphone at verizon

it was probably a april fools prank

Well HTC you're going down again.. You should have never announced and released ONE if its hard to make. ONE is like a teaser but not officially considered as phone.. (hope you get what i mean there) I love HTC designs but they fail in the marke...